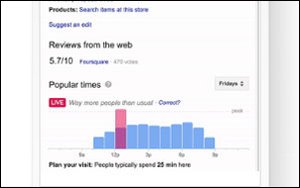 Rhode Island and Delaware had the most searches containing the keywords "near me" of any state in the U.S. during the U.S. holiday Black Friday weekend, according to data from Google released Monday.

Online searches helped in-store traffic jump nearly two-thirds in the U.S. on Black Friday, per Google data that attempted to draw a correlation between online searches and in-store visits. The AdWords Store Visits metrics aggregates anonymized data from Android users that have "Location History" activated on their device.

Bing also began showing real-time holiday hours in search results. The Bing holiday hours feature launched on desktop and mobile in time for the holidays. The extra information aims to help consumers make the connection between what they search for online and travel into the stores to purchase.

While Black Friday had the highest mobile shopping searches on google.com of any day during the weekend, Thanksgiving Day came in a close second -- peaking at 8 p.m., presumably after visitors had left and families were winding down for the night after a full day of activities.

Consumers also took to desktops, increasing online sales. comScore also reported that consumers spent $24.52 billion online in the U.S. from desktops -- up 12% compared with 2015 -- during the first 25 days of the November to December 2016 holiday season.

comScore data shows that households earning more than $100,000 in annual income accounted for 42% buyers and 45% of desktop spending on Black Friday.