Programmatic Is Problematic, Even When It Works

The problems with programmatic are well-covered and greatly ignored.  Reported growth in spending continues to fan the frenzy, while sweeping significant problems under the rug.

The biggest problem with programmatic, of course, has to be the non-human traffic.

Bots surf the Web the way a human would, so cookies get dropped and that browser seems like a legitimate target audience.  The bot then travels to a bullshit site with bullshit content, and programmatic triggers the serving of ads. So advertisers pay real money to fake sites for ads seen by no one.

Talk to the brilliant Professor David Carroll (@profcarroll), who can break down this problem better than anyone while painting an even darker picture of where these ad dollars end up.

Today however, let’s stick our head deeper in the sand and ignore this non-human traffic thing for a minute.

Over 70% of  overall spending in programmatic is for open exchange inventory, with millions of sites competing to earn those ad dollars.  Sites that rely heavily, or exclusively, on this kind of ad revenue are rewarded for creating a disastrous user experience.  That’s because publishers cashing programmatic ad sales checks are incented to jam in as many ad impressions per page view as they can.

SFgate.com is an example of one of those sites.  It should have its publishing license revoked.   The fact that this site resides in the Bay Area -- where digital advertising all started -- is a sad and ironic joke.

On any given day, SFgate.com, which I find when Yahoo publishes leads to its stories, will run up to 12 different display ads on its home page. All appear to be sold programmatically.   That’s not counting the native content swimming in this cesspool of a site, either.

But, OK, let’s stick our head a little further in the sand and pretend 12 ad units per page view is not a big deal.  Programmatic still has fundamental problems.

Close to 90% of ad impressions bought through programmatic open exchanges are based on retargeting.  Visit an advertiser’s site, get a cookie taped to your browser like toilet paper stuck to your shoe -- and now, wherever you go on the Web, publishers over-serve you that advertiser’s ad.

I have two cats, 16-year-old brother and sister named Momo and Maxine.  The latter is starting to miss the box, so I went to Petsmart.com a while ago to see what solutions exist.

As a pet owner, I tend to read stories on Yahoo about pets.  Last week, I read a headline about a dog that was killed by a pet groomer working at Petsmart.  I clicked through to read the whole story, and was met with this: 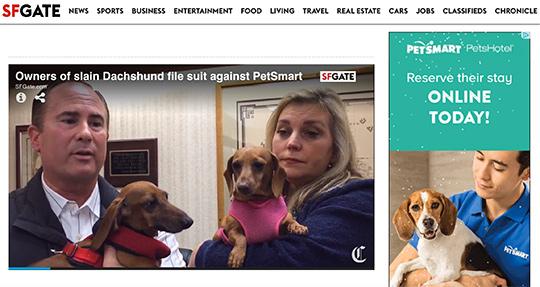 Before you argue, “this is a one-off impression,” please consider this: Millions of “pet enthusiasts” like me were served a snippet of this story on Yahoo.  Many felt their heartstrings pulled and clicked through to SF Gate to read the story.  A large percentage of “pet enthusiasts” have cookies from a pet site, so it’s likely that many people were served the worst ad placement in the history of advertising.

It gets worse.  I searched for this story a week after I first encountered this ad placement, and Petsmart ads are still serving to my browser.  No one has a clue on where the majority of programmatic ads sold are served, so no one at Petsmart even knows they need to stop this.

The programmatic world is so good at touting their success  -- but they never report on the 99% of the people who did not click, who did not convert, who did not generate attribution credit.

I would love to know, of the 99% of the people who saw this ad and did not engage, how many now have a negative opinion of this programmatic advertiser?  What percentage was so offended by the insensitivity of this ad placement that they won’t ever shop at Petsmart?  What percentage now thinks Petsmart is Petdumb?

Programmatic doesn’t work. Ads are served when a cookie in a browser says it’s the right person -- while so often, the content where the ad is seen is saying it’s the wrong time.

ad targeting, behavioral targeting, bots, programmatic, retargeting
7 comments about "Programmatic Is Problematic, Even When It Works".
Check to receive email when comments are posted.
Read more comments >
Next story loading