The Internet Of Interrupting Things 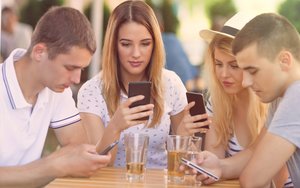 One of the many promises of the Internet of Things is that the increasing number of smart and connected devices will make life a bit easier.

The idea of smart gadgetry or appliances knowing when to start and shut themselves off could free consumers from some decision-making, at least conceptually.

One of the most prolific devices and the primary IoT hub for now is the smartphone, which doesn’t always drive consumer-free actions.

During this holiday season, consumers are expected to tap into their smartphones and other technology to help them along, with most (79%) consumers saying technology enhances their enjoyment or relieves the stress of the holidays, according to a new survey.

However, technology can be distracting.

Many (41%) say they are frustrated that their family or friends are increasingly distracted with looking at their smartphones during the holidays, according to the survey of 1,000 U.S. adults conducted by Sequence.

In the longer term, connected things will increasingly create more automation. Smart homes will be connected to cars and wearables will become freed from smartphone tethering.

In the shorter term, as in the realistically foreseeable future, smart and Internet-connected things will continue to digitally tap consumers on the shoulder. For example:

Many connected things today still require human interaction and more smart things likely soon will be found under the Christmas tree. Consumers also have an interesting holiday wish list, according to the Sequence survey. If money was not a factor, these are the technologies consumers would want as a gift this holiday season:

No matter what smart or connected device consumers receive as a holiday gift, that device is highly likely to require some action on the part of the consumer.