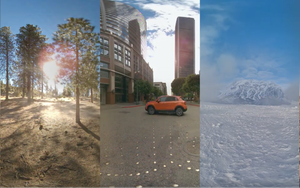 Fiat Chrysler Automobiles is highlighting a 360 video that aims to demonstrate the all-wheel drive system of the Fiat 500X crossover.

“A Whole New Spin” is a social extension of the automaker’s current ad campaign. The 54-second video allows the viewer to follow the Fiat 500X through four unique environments: beach, forest, city and snow. The video posted December 19 to Facebook.

The creative execution features the same vehicle driving around the viewer, through four diverse environments, seamlessly traversing each quadrant. This allows the viewer to follow the vehicle as it moves from one setting to the next, while surveying each environment above and below the space in which the 500X travels.

The video was shot on the Nokia OZO and the social AOR for the brand, Society, and production company, Rodeo Show, took care to ensure that the movement of the Fiat 500X crossover from one quadrant to the next was perfectly aligned in its drive path, so that the vehicle seamlessly exited and entered each scene.

On set, the position of the sun in each environment was matched to add to the visual continuity as the vehicle moved from quadrant to quadrant to create a surreal, enveloping vignette that surrounds the viewer. In addition, for viewers on mobile, the sound design is triggered by the direction in which the viewer is facing, providing accurate spatial audio, based on the scene the viewer is facing.

The execution joins Fiat’s “A whole new way to look at Fiat” campaign for the 500X which broke in April.

It includes six videos that are airing on TV and across the brand's social channels, including YouTube, Facebook, Twitter and Instagram. The campaign was created in partnership with FCB Chicago, directed by Jared Eberhardt and produced by Partizan.

"We needed to change the conversation and do a fundamental shift in strategy to highlight the specific attributes of the Fiat 500X crossover, including its larger size and 4x4 capability of the model," said Olivier Francois, chief marketing officer, FCA–global and head of the Fiat brand, in a release. "Provoking people to see Fiat in a new and fresh way achieved through creative techniques not used before in car advertising is also a reflection of our philosophy -- do things different to stand out. And do them in a way that makes a meaningful difference."