Search Engine Finds How Fake News Spreads (No, People Don't Search For It) 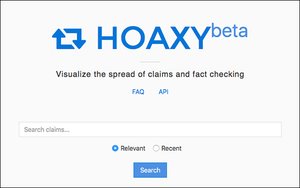 Researchers at Indiana University have developed a search engine, Hoaxy,  to demonstrate how fake news and unverified stories spread through social media, after showing how they generated revenue from advertising based on the misinformation.

The platform tracks social sharing of links on "independent fact-checking sites like snopes.com and factcheck.org, and sources that publish inaccurate, unverified, or satirical claims "according to lists compiled and published by reputable news and fact-checking organizations," per the Frequently Asked Questions (Q&A) page on the university's site.

"Social media makes it more likely that I am more exposed to false information that I am likely to believe," Menczer told Reuters.

Hoaxy relies on Web crawlers to extract links to articles posted on fake news Web sites and links to their debunking on fact-checking sites. The post explains that the search engine uses social media APIs to monitor how these links spread through online social networks. The collected data is stored on a database for retrieval and analysis. A dashboard will provide interactive analytics and visualizations.

Fake news also enabled Menczer and researchers to make money during an earlier research phase. Ten years ago, Menczer and colleagues ran an experiment where 72% of the college students participating in the study trusted links that appeared to originate from friends, even to the point of entering personal login information on phishing sites.

He placed ads on a fake Web page that he created and populated the site with random, computer-generated gossip news. A disclaimer ran at the bottom of the page saying the site contained meaningless text and made-up facts. At the end of the month, he received a check in the mail with earnings from the ads, proving that he could make money off fake news.

Google is actively working to stop fake news from appearing in search engine results and also is taking steps to stop advertisements powered by AdSense, its ad-serving platform, from serving on publisher sites known to publish fake news.