The Future Of VR In The Back Rooms Of CES 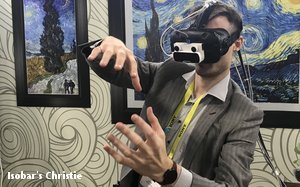 LAS VEGAS -- Virtual reality was on display in various forms throughout CES.

On the main floors, numerous companies showed their "better-made" versions of Google Cardboard or their iteration of hardware more HTC-Vive or Oculus Rift like.

Most of those presentations focused on where virtual reality is.

For a look at where virtual is going, Leigh Christie -- manager of Isobar NowLab Americas and a tech wizard around all things related to virtual reality -- offered to help out.

Christie took me, Isobar President Jim Butler and Marketing Director Paul Buranosky to meet with some of the companies hidden deep into back areas of Eureka Park, the infamous "Hall G," the home of very leading-edge innovation at every CES.

We saw two separate but significant VR advancements that indicate where VR is heading.

One company, TPCAST -- a Chinese company that HTC has invested in -- presented a wireless accessory for HTC Vive headsets that allows users to roam freely around a room without wires from the headset dangling everywhere.

Christie maintains that this is a very big deal, as a major step to freeing the use of virtual reality headsets without being tethered to a certain location or range. 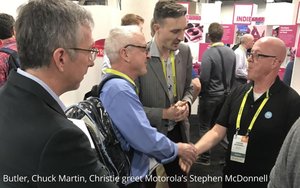 The second company, Impression.PI, demonstrated a VR technology that allowed a sensor on the front of the headset to accurately map the wearer’s fingers.

Christie and I tried them and both devices worked as advertised.

One of the issues with high-end VR headsets is still that the person’s hand is typically represented by devices held by the user. The devices can be excellent in usage but still require a thing to be held.

The idea of sensors that map fingers aims to negate the need to hold a device for a VR experience.

By CES next year, some of these VR capabilities are likely to be more mainstream and incorporated into the devices themselves, rather than being add-ons.

And next year, we can look to Christie and the Isobar team again to see what’s cooking in the back rooms of CES.