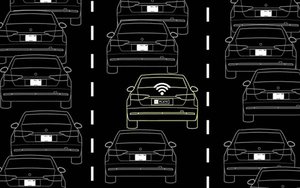 In a sign that the connected car is going to involve more than just Internet connectivity, a company at the auto show in Detroit this week is introducing a digital license plate.

The rPlate and information platform comes from Reviver in partnership with motor vehicle departments.

I caught up with Neville Boston, CEO and founder of Reviver, who was at the auto show to discuss some of potential of the new plates, which house a GPS, accelerometer, RF sensors and storage.

Initially targeted to fleets of cars, such as rental companies, the connected plates could become highly targeted mini-billboards. The rPlate is the same size as a standard license plate and has an anti-reflective screen.

Advertising could be sent to license plates based on location, according to Boston. For example, a Procter & Gamble brand could be broadcast to cars all parked with a certain distance of a particular store that carried that product.

“In a Home Depot parking lot, you could send ads that speak to what’s in a store,” Boston said.

Prototype plates already are operational in California and Reviver has approvals from state legislators in Florida and California and preliminary approval from Arizona’s DMV, according to Boston.

The 8-year-old company plans to launch the rPlates in Texas, Arizona, California and Florida by the end of this year.

Messages on the plates could dynamically change based on geolocation configuration. Already included in the plates are programming for emergency broadcasts like extreme weather warnings or Amber Alerts, as well as VIN-specific recall notifications. The plate also can automate the payment of toll road charges and parking fees.

Reviver works with the local DMV with the DMV having approval of the types of advertising and messaging that could be sent through the Reviver rPlate platform.

“It’s always a partnership with a DMV,” said Boston. “It’s a public-private partnership. The rPlate is about automating really simple things.”

Whether consumers will want their car to become a moving billboard, the cost of messages delivered per plate (dreading a cost-per-plate metric) and the extent of state approvals, among a host of other issues, are yet to be determined.

But in true IoT fashion, anything that moves can be tracked. And license plates are constantly on the move.