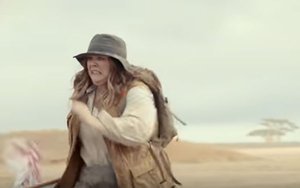 In a bid to generate some earned media for its upcoming Super Bowl spot—as most advertisers in the game tend to do now—Kia has unveiled a 15-second “teaser” for the commercial. Ad shop David&Goliath is creating the ad.

Last week the auto maker confirmed it would star comedic actor Melissa McCarthy and that it would appear in the third quarter to promote the 2017 Kia Niro hybrid crossover vehicle. Last week two 15-second TV spots for the vehicle debuted that McCarthy narrates but does not appear in.

The Super Bowl teaser shows McCarthy, dressed in safari-like garb, frantically running through the desert, screaming and yelling and looking over her shoulder as if to see how much ground whatever she’s running away from is gaining on her.

Beyond the screaming and yelling, McCarthy doesn’t say a word, but her manic, wack-a-doodle persona is on full display.

The spot ends with the graphic, “Get Ready For the 3rd Quarter.” The company further reveals that the in-game spot “traces a heroic and harrowing journey stretching from the polar ice caps to an arid desert, and continues to prove why the Niro is ‘a smarter kind of crossover’ with its no-compromise package of style, utility and fuel economy of up to 50 miles per gallon combined.”

That’s an Environmental Protection Agency city-highway combined estimate on the mileage. No word yet on what kind of mileage the vehicle gets bouncing around the polar ice caps or via rugged desert terrain. Maybe that will be revealed in the 3rd quarter too.