Humpty Dumpty To Star In Super Bowl Ad For TurboTax 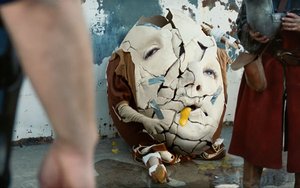 TurboTax launched the first of three Super Bowl teaser ads, starring beloved nursery rhyme character, Humpty Dumpty. This marks the brand's fourth consecutive year advertising during the big game. A 45-second spot will air during the first half of the game.

Everyone knows the famous egg fell from a wall, but what was he doing on the wall? His taxes.

In "Humpty Fall," created by Wieden+Kennedy Portland and directed by Ivan Zachariáš, Humpty is discovered at the bottom of the wall, a shell of his former self.

As friends attempt to piece him back together, they can't help but wonder what Humpty was doing on the wall. A quick scan of his phone shows he was preparing his taxes.

Humpty's fall becomes headline news, with everyone wanting to know why he was doing his taxes on a wall. "Because you can," Humpty says to the TV in his hospital room.

"We're excited to once again be part of some of television's biggest live events at a time when taxes are top of mind for millions of Americans," said Greg Johnson, senior vice president of marketing for Intuit TurboTax. "The Big Game and The Grammy's give us unique opportunities to demonstrate – in an entertaining and memorable way – that with TurboTax, there's expert help, on demand in the palm of your hand."