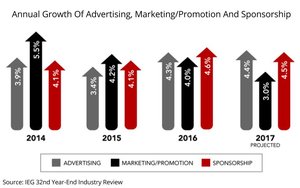 Global sponsorship spending is projected to rise 4.5% in 2017 to $62.8 billion, according to IEG, the WPP sponsorship consultant. That’s just slightly below the 4.6% growth rate achieved in the sponsorship sector last year.

In North America, the world’s largest sponsorship market, growth is expected to lag behind the global rate, increasing 4.1% in 2017 to $23.2 billion, following 4.2% growth last year.

According to IEG’s analysis, one factor that could prove to be a drag on spending is the lingering gap between sponsor expectations and properties’ ability to deliver. That refers to both personalized marketing opportunities, based on audience data, and digital content and platforms.

IEG also cited geopolitical issues that could inhibit sponsorship growth including uncertainty over global and local economic conditions in the wake of Brexit, and the Trump election.

Spending by Chinese enterprises, both locally and abroad, will be the driving factor behind the Asia Pacific region’s strong sponsorship growth—anticipated to again be the highest of any region at 5.8% in 2017 on the heels of 5.7% growth in 2016.

Sponsorship’s global spending will grow at a similar rate to advertising, while exceeding the projected increase for other forms of marketing—including public relations, direct marketing and promotions—according to IEG sibling firm GroupM’s This Year Next Year forecast. Global ad spending is expected to increase 4.4% in 2017, while spending on other marketing services is expected to grow by just 3%.

In North America, sponsorship growth should outpace other forms of marketing, with ad spending expected to grow just 2.6% with other marketing spending up 3.2% according to the GroupM report.

In the region, sports remains the dominant property type in the sector, commanding $7 out every $10 spent on sponsorships.