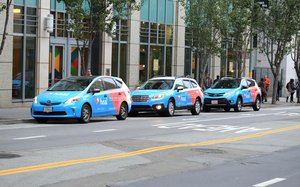 95.5 FM and 94.7 FM have teamed with Wrapify, a mobile outdoor marketing company, to wrap specific cars with advertising from Washington metro advertisers.

Wrapify then divvies up the revenue with car owners, who on average, make an estimated $450 per month. Drivers/campaigns usually run three, six or 12 months.

There is no client list yet for the nation's capital, but brands using Wrapify in cities such as San Francisco, Los Angeles, Phoenix, Atlanta, and Miami include Anheuser Busch (for Bud Light), eBay, Lyft, Petco, Harrah's, among others.

The out-of-home ads match a driver to the campaign in their location. It’s hyper-local advertising on wheels, which can be site- or neighborhood-specific with full and partial wraps, depending on need.

Wrapify has clear dictates: Drivers who have heavy commutes in particular regions usually get chosen. They don’t drive aimlessly, but along clear routes.

Drivers keep the Wrapify app, available on iPhone and Android, running in their cars. The app uses GPS to track the each route. It also measures the number of impressions, based on local traffic patterns at various times of day.

Indeed, the metrics are a big draw.

James Heller, CEO of Wrapify, praised the effort as a way for people to up their income, while clients can “integrate visual impressions into their advertising campaigns.”

Rex Regner, director of product development and Innovation for CBS Radio in DC, agreed, stating the partnership will “strengthen our marketing assets in the area by providing our clients with a way to reach more out-of-home consumers.”