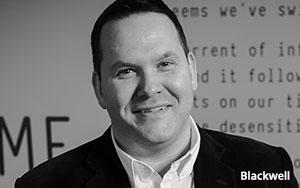 He will oversee the development of gyro’s digital products and services across its 16 offices worldwide.

Blackwell has been a part of the Dentsu Aegis Network (DAN) for four years, working first at B2B shop Carat Enterprise, which was rebranded Interprise. There he served as U.S. president, responsible for building, growing and leading the agency with Stuart Giddings, who is now Global President at gyro.

Interprise was integrated into gyro following the agency’s acquisition by DAN in July 2016.

Prior to that, he led international digital sales at VNU Business Publications, where he conceived and launched the company’s B2B digital advertising network which counted Intel and HP among the first clients.

Christoph Becker, gyro global ceo+cco, said: “gyro is at the forefront of reinventing the way we see, consume and feel advertising in the dynamic business-to-people space. Liam’s knowledge of the precision that media and technology brings to B2B is truly something special.”

A UK native, Blackwell has lived in San Francisco for more than a decade and will be based at gyro’s offices there.