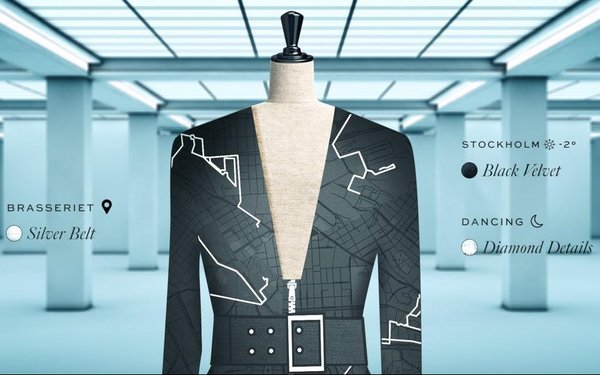 In the age of digital data where intent signals come from all sorts of activities from mobile devices, one designer clothing brand has cozied up to Google in an effort to create an experience to deepen the connection with consumers.

Ivyrevel has created a way to use search, location and other types of data that comes from daily use of a smartphone to design one-of-a-kind dresses based on consumer behavior and activities.

The technology learns from signals collected by the smartphone application and translates that data into likes and dislikes to create a unique dress that tells a personal story about the wearer.

Ivyrevel, a fashion brand backed by the retail store H&M, calls the process Coded Couture. Downloading and activating the Android app on the smartphone opts consumers into the experience. The Android app monitors daily activity and collects the data through Google's snapshot API.

A week's worth of signals from location visited, preferences and searches are fed into an algorithm that produces a digitally tailored designed dress the consumer can purchase, according to the video.

Ivyrevel has its own fashion line sold at H&M, but Data Dress is an initiative from the brand's Fashion Tech Lab committed to reshaping the future of fashion. The design house, founded in 2013, has a goal to merge data and fashion.

The app launched in closed beta stage and is being tested by a select group of what Ivyrevel calls "style influencers," including Ivyrevel's co-founder Kenza Zouiten.

In the coming months, other influencers will share stories of how the Data Dress app captured their lifestyle in a dress. The app launches to the public in late 2017.