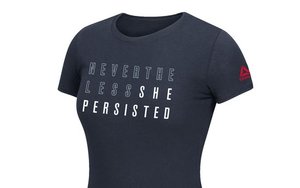 If there was any doubt that Republicans handed marketers pure gold in shushing Sen. Elizabeth Warren last week, it’s this: Reebok says it sold out of its “Nevertheless She Persisted” T-shirt the same day it went on sale.

And in the midst of New York Fashion Week, clothing brands are fiercely flying their feminist (and decidedly anti-Trump) flag. Prabal Gurung’s line features T-shirts with slogans like “Our Minds Our Bodies Our Power.” And Conde Nast powerhouse Anna Wintour, along with hundreds of other attendees, are sporting a big pink “Fashion Stands With Planned Parenthood” buttons.

It’s likely that brands will quickly move beyond T-shirts and buttons, finding deeper and more complex ways to mine women’s strong reaction to current events. Senator Mitch McConnell’s rebuke to Warren went meme-tastic almost before he finished his sentence. Versions of “She was warned. She was given an explanation. Nevertheless, she persisted” appeared all over the Web, and almost immediately began trending on Twitter.

“It was just so good,” says Samantha Skey, president and chief revenue officer at SheKnowsMedia. “It was like copywriting from the other side.”

And what makes #ShePersisted so rich, she says, is that #femvertising continues to have wide appeal, often keying in on women’s pluck and determination. “Many brands, those who know their audiences well, will be able to tap into that sentiment, and use it in a way to become more confrontational.”

She says the act itself — a man telling a woman she doesn’t have the right to speak — has emotional resonance far beyond politics. “Even women who don't support Elizabeth Warren — and even those who don't really understand what it is she was speaking about — have a gut reaction. Women everywhere can relate to this — it’s mainstream.”

Reebok thinks so. Calling McConnell’s remarks “a rallying cry,” it’s donating $20 to Women’s March for every shirt it sells. “Deep down inside of us there’s a powerful form of hope that can’t be crushed by any setback,” it says in its Web site plug for the T-shirt, now on back order. “We see a better day ahead and we will continue to take a stand and fight alongside those who deserve to be heard.”

That’s not to say, of course, “that plenty of brands are deliberately shying away from controversy, too,” Skey tells Marketing Daily. “I expect we will also see a big jump in the use of puppies and hedgehogs, as a result.”

But many fashion and beauty brands, she says, are willing to court controversy, and being ahead of the curve is part of the brand positioning, “like Cover Girl shifting to gender-fluid cosmetics, for example. In these categories, you’ll see more pro-female and even politicized advertising. It’s a matter of touching on what women feel most passionate about it and right now, it’s these social issues.”

Fashion brands are clearly playing to those passions. During Fashion Week, Christian Siriano is pairing formal satin skirts with “People are People” t-shirts. (Proceeds go the American Civil Liberties Union.) Public School’s models are walking the runway to the strains of “This Land is Your Land,” wearing red ball caps that say “Make America New York” and hoodies emblazoned, “We need leaders.”

That’s important for brands, since SheKnows’ recent #Femvertising research reports that 59% of women say they have followed a brand in social media because they like what it stands for, and 47% have shared an ad that contains a pro-female message. And there’s been a shift in expectations of both women and men, with 83% of both saying they believe any brand can find a way to deliver a pro-female message. (In its 2014 research, 74% expressed that belief.) And 46% of women say they’ve stopped buying a product because they didn't like the way women were portrayed in advertising.