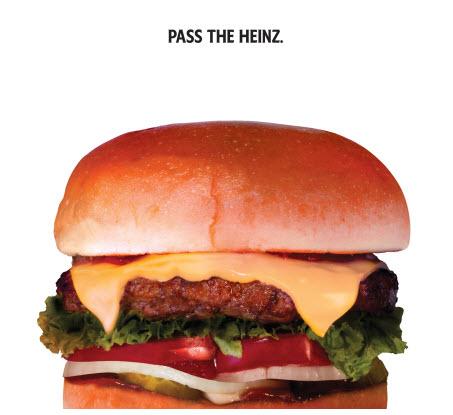 Heinz and agency David have turned a creative pitch made by “Mad Men” protagonist Don Draper into a real-life campaign.

The campaign features near-replicas of three ads that Draper pitched on the show. Each ad consists simply of a silhouetted close-up of food typically topped with ketchup — a cheeseburger, French fries and a piece of steak — with “Pass the Heinz” as the only copy.

All three ads were unveiled today on billboards in New York City. They will also run in The New York Post and on social media. In addition, the fries version will run in Variety.

In the show, Heinz rejected the “Pass the Heinz” campaign because its marketers doubted whether consumers would get the connection absent an image of a Heinz Ketchup bottle.

But Heinz is employing the concept now for the very reason that it demands engagement by requiring the viewer to fill in the missing element — at the same time that it tantalizes with mouthwatering food images.

In re-watching that “Mad Men” episode, David founder and chief creative officer Anselmo Ramos and co-creatives lamented the rejection of an inspired idea and resolved to try to bring it to life for Heinz today, Ramos told BuzzFeed.

“We hear from our consumers that food just doesn’t taste the same without Heinz,” summed up Nicole Kulwicki, head of Heinz brands. Heinz is amplifying the buzz around the campaign, which is also employing social media, by crediting “Mad Men’s” fictional agency, Sterling Cooper Draper Pryce, as co-creators with David in its PR outreach.

Heinz negotiated with the TV series’ production/distribution company, Lionsgate, to enable the campaign.