FCB's 'Tug Of Hope' At SXSW 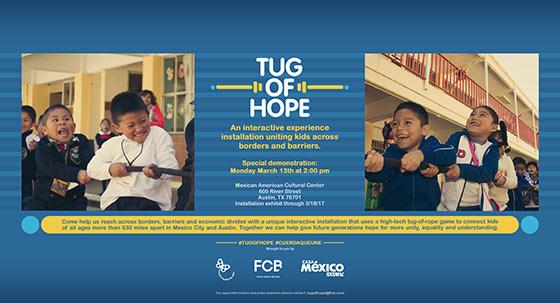 FCB is using SXSW to introduce "Tug of Hope," an interactive installation that uses a tug-of-rope game to digitally connect players in Mexico City and Austin, which are more than 930 miles apart.

Developed with Mexico City’s Papalote Children’s Museum (PCM), the concept deploys a combination of smart screens, a custom-designed pressure device and old-fashioned rope to highlight the values of teamwork, unity and equality.

The original idea was born from an initiative that FCB created in partnership with the PCM last year, which allowed schoolchildren from different socioeconomic backgrounds across Mexico City to play with each other.

“Tug of Hope” makes its debut on Monday, March 13 at the Mexican American Cultural Center in Austin. Then the exhibit will be on display throughout the week, from March 14-18, between 10 a.m. – 6 p.m. each day. Following SXSW, FCB and Papalote plan to continue this educational activation between kids at museums around the world.

“At a time when there is political, geographical, cultural, socioeconomic and religious divisiveness, we’re still all human at the core," says Humberto Polar, EVP, Creative, at FCB Mexico. "We feel very lucky to create something like this that helps teach our children fundamental values of equality that equip them to make the world a better place.”