Sasquatch Shows Off His Cool Side In Jack Links, Funny Or Die Integration 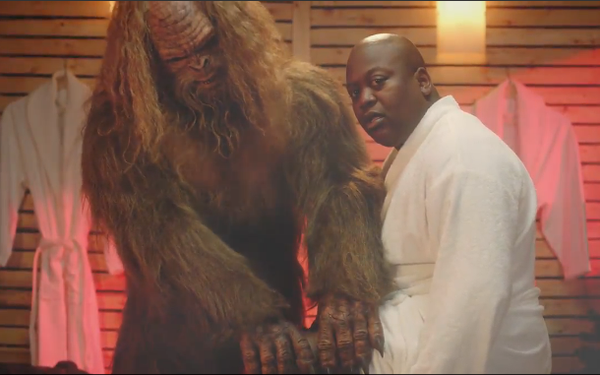 Sasquatch shows off his cool side in a new effort from Carmichael Lynch — in collaboration with comedy content platform Funny or Die — for Jack Link’s jerky.

The two-minute spot opens in a sauna where a robed Burgess sits after he’s been “workin’ out real hard,” and suggests grabbing some Jack Links protein-packed jerky to help muscle recovery.

Launching into the “duet,” Burgess sings: “Your body is tightening and straining for some sweet relief….After working out your booty chill out with a Sasquatch foody...”

Burgess and the beast are seen rubbing each other’s sore spots as the song continues in a campy-sensuous way to tout jerky as the ideal workout recovery snack.

Sasquatch doesn’t add much to the duet—he growls from time to time, and Burgess interprets: “he says how much can your mouth bitch,” for example. During the number, the beast also clangs on a keyboard in a way that’s more than a tad off key.

The spot ends with Burgess telling the viewer: “Step up, to cool down.” As Burgess walks off camera, Sasquatch remains seated at a keyboard, curiously sniffing a microphone.

For the past year, Jack Link’s ads and videos have focused on fueling up and “working out” with Sasquatch. With the latest video, says Jack Link’s CMO Tom Dixon, “we wanted to show our fans how to cool down,” using jerky as a recovery snack.

In addition to the music video, Jack Link’s and Funny Or Die will be releasing “Coolin’ Down With Sasquatch” bonus material as part of a media integration with the platform, including a “Best Cool Down Jams” playlist article and custom social posts.

Brand pre-roll and display ads will run across the platform.