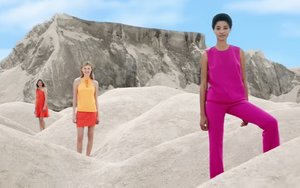 Spring is coming, and both Target and New York & Company are introducing new warm-weather fashion lines that are high on spice.

And she promised that the clothes, which include her first foray into designing for children, would be just as beloved by little girls as grown-ups. The Minneapolis-based retailer delivered with 200 items for women and girls that are both bold and ultra-feminine. It’s heavy on dresses, skirts and rompers (even for adults), dominated by florals, gingham, scallops and satin.

An ad for the new feature the fashions set to the soundtrack of — what else? — “Spice up your life.”

The line is due in stores on online early next month through the end of April — or as long as it lasts. And while it’s too early to say how it will go over with the public, previous collaborations, including 2015’s Lilly Pulitzer for Target, and 2011’s Missoni for Target, sold so briskly that they sparked Web site outages and shopper fury. (Much of the best stuff was bought up by pros and resold on eBay before many fans had a chance to make it into stores.)

And retailer New York & Company, in rolling out the latest Eva Mendes collection for spring, says shoppers are so hungry for the Cuban actress’ line that it intends to launch 24 more shops-within-shops and add six new locations. That brings the collection to a total of 50 stores, and 19 Eva Mendes boutiques.

The company says the actress’ line reached $50 million in sales this year, and it expects to double that to $100 in the near-term.

That switch in focus comes as the retailer struggles to manage the same trends flummoxing stores everywhere: Sales fell to $266.3 million in its recently announced quarterly results, compared to $271.3 million in the same period a year ago. And comparable-store sales slipped 0.4%, offset by e-commerce gains and revenue from its new private-label credit card.