Anatomy Of A Masterpiece: The Making Of 'Pet Sounds' 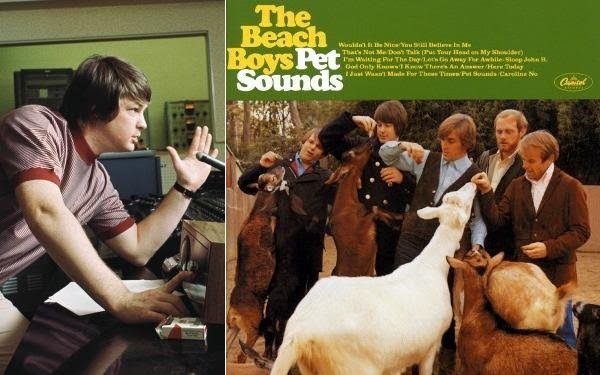 If the Beach Boys' "Pet Sounds" album was such a masterpiece, why did they end up being depicted on its cover cavorting with a bunch of goats?

Band member Al Jardine provides the answer in a documentary about the 1966 album that premieres on Showtime Friday night (April 7).

Basically, says Jardine, the suits at Capitol Records didn’t understand the record because its sound and subject matter had veered so far away from the formula that had made the Beach Boys successful up to that time, which was surfing and hot-rod records.

“They just didn’t understand it …," Jardine says in the one-hour documentary, titled "The Beach Boys: Making Pet Sounds." "They didn’t know what to do with it.

"They’re a marketing firm,” he said of Capitol. “How do you market [the] Beach Boys with 'Pet Sounds'? Well, we'll send you down to the San Diego Zoo and we’ll photograph you with a bunch of damn goats. I mean, what’s that all about? That was the biggest miscarriage of justice of all," he says with a laugh.

Like so many other masterpieces throughout the histories of various arts, "Pet Sounds" did not sell well at the outset, nor was it critically acclaimed.

"It took 20 years for it to go platinum, which was ridiculous," says Beach Boy Mike Love in the documentary, although the doc implies that even Love wasn’t entirely on board with this new direction in the Beach Boys’ music.

As the documentary makes clear, "Pet Sounds" was a pet project of Brian Wilson (seen in the above photo, left, producing the album). No one argues that Wilson had been the genius behind the Beach Boys sound from the very beginning.

Wilson was interviewed at length for this documentary, and he appears frequently in it. In pushing the record company and his bandmates to participate in the production of "Pet Sounds," Wilson’s goal was largely a creative one: He wanted to "write something better than surf songs and car songs," he explains.

The result was an album whose best-known songs are the singles "Wouldn’t It Be Nice" and "God Only Knows." True fans of the album know the rest of the songs just as well, including "That’s Not Me," "Don’t Talk (Put Your Head On My Shoulder)," "I Know There’s an Answer," "I Just Wasn’t Made for These Times" and the instrumental "Pet Sounds."

This fascinating documentary makes a strong case for the album’s status as a masterpiece of the recording arts. The film delves deeply into how the sounds on "Pet Sounds" were produced. Testimony is given by many who were there, including members of the group of L.A. recording session players known as The Wrecking Crew.

Among those interviewed is Tony Asher, co-writer on eight of the songs on "Pet Sounds." Asher, who had been a composer of commercial jingles before "Pet Sounds,” tells a great story about meeting Brian Wilson by happenstance in a hallway at a recording studio where they were both working. From that meeting, they forged an unlikely songwriting partnership.

Among other things, various witnesses note that Wilson was a fan of Phil Spector’s "Wall of Sound" approach to making records, and under Wilson’s direction, the "Pet Sounds" recording sessions featured an ever-growing body of musicians.

For example, there was not one piano, but usually three, remembers one interview subject.

For all the challenges and difficulties that went into making "Pet Sounds," the documentary gives the impression that the record company execs thought well enough of Wilson that they don’t seem to have exerted any disruptive efforts to rein him in as the recording sessions dragged on and the studio became full of musicians who needed to be paid.

As for the goat photo on the album jacket, maybe no one ever explained to the Capitol execs what the title "Pet Sounds" was supposed to mean in the first place. Ironically, it’s not explained in the documentary either.

music, tv
2 comments about "Anatomy Of A Masterpiece: The Making Of 'Pet Sounds'".
Check to receive email when comments are posted.
Read more comments >
Next story loading