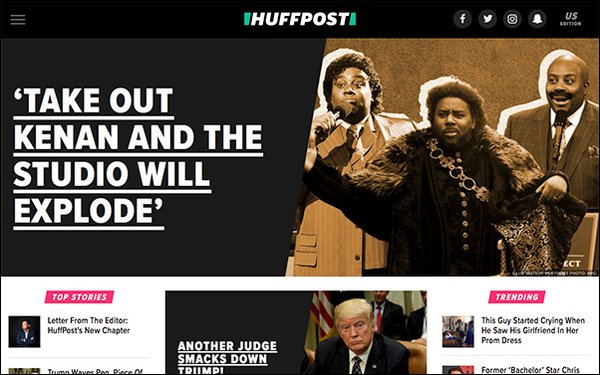 One of the most successful digital-only publications of the last decade is getting a big makeover.

The new look for HuffPost’s site, produced in partnership with design outfit Work-Order, includes a new homepage layout meant to better showcase it coverage of politics, entertainment, lifestyle, and “voices.”

The page is organized under a gripping “splash” image from the most important story of the day, in a nod to mobile consumption, with visually focused “splash cards” below for other stories, all optimized for social sharing.

The new logo gives the publication’s name a streamline, forward slant between two green wedges, in a winking reference to the forward slash of URL fame.

HuffPost is also looking to expand Highline, its digital magazine, and increase the volume of video content across its digital properties, with a prominent video player showcasing original news video content.

On the advertising side, HuffPost has combined or abandoned numerous redundant advertising formats, allowing it to reduce the number of ad tech programs and speed up downloads for readers. It is also putting new emphasis on AOL’s premium InContent Reveal ad unit, a full-width interactive format, as well as pushing more high-profile video and native ads.

In terms of editorial mission, HuffPost will focus more on writing for (rather than merely about) people “who feel left out of the political, economic and social power arrangements,” according to a note from Polgreen to readers.

She added the new approach comes in response to Donald Trump’s presidential victory. “A lot of journalists are asking ourselves whether our audience should trust us. How were we so wrong? Are we out of touch?”

Polgreen continues: “We can do better for people who feel that too much political and economic power has accrued to a very small elite. People who feel they are on the outside looking in at the prosperity created by globalization and technological transformation. That the game is rigged; that the deck is stacked against them; who feel that the house always wins.”

Noting that this group includes most people who voted for Trump, but also many people who voted for Democrats Hillary Clinton and Bernie Sanders, all of whom fall on the wrong side of a broader power divide. Polgreen argues: “The media has come up short in telling the story of one side of that divide - of the people experiencing anger, voicelessness and powerlessness.”

As noted, the revamp comes less than a year after the departure of founder Arianna Huffington, who left last August to serve as editor-in-chief of a health and wellness startup, Thrive Global. In 2011 HuffPost was acquired by AOL, which was subsequently acquired by Verizon in 2015, an event many saw prompting her eventual departure from the company.