Intel Knows 'The Future,' And It's A Shimmering Guy 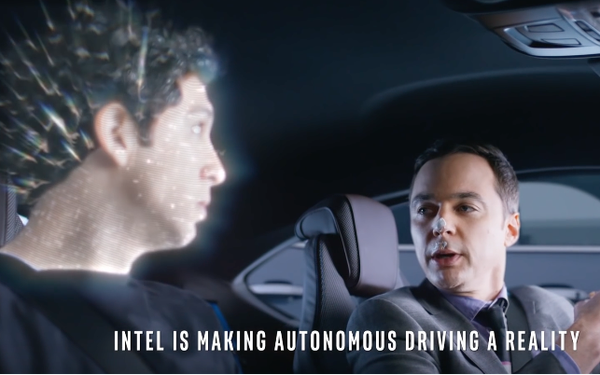 All those self-driving cars aren't really driving themselves. There's some sophisticated technology behind them, and they're powered by Intel.

In a new business-to-business campaign, Intel pairs longtime company spokesperson Jim Parsons with a new character, “The Future,” a glowing twenty-something designed to make edgy executives more at ease with how technology can help their business.

“A huge percentage of business owners are concerned about the future and what the future means for their business,” Alyson Griffin, vice president of global marketing and communications for Intel, tells Marketing Daily.  “The campaign sets out to both inform and educate senior business decision makers—to lay claim to our leadership as architects of the future and provide content and tools that illustrate how Intel-based solutions can help businesses navigate and succeed in that future evolution.”

In one recently released spot, Parsons and The Future are stuck in a traffic jam when a radio pundit proclaims that traffic — while bad now — will be a “nightmare” in the future. This upsets the character, who wonders why everyone is so afraid of him. Parsons sets his mind at ease, explaining how Intel is powering not only the cars, but the 5G network they connect to. (The Future is also prescient about other non-technological events, informing Parsons of napkins in the glovebox before the latter gets cream cheese on his face.) Other spots in the campaign feature the characters advising a worried business executive about the potential of artificial intelligence and The Future shopping alone, telling a retailer about how customer data will help design a better store.

The spots expand on a previous B2B effort from earlier this year (the brand’s first-ever such campaign) by more directly addressing the issues that business executives face, and how the company can help solve them.

“We’ve learned that senior business decision makers are less interested in traditional speeds and feeds and, instead, desire to be informed of how they can drive business transformation, open up new revenue streams, and reduce operating cost with best in class technology advancements,” Griffin says.

The campaign launched earlier this month in the United States, and will roll out globally on digital platforms over the next month, Griffin says.