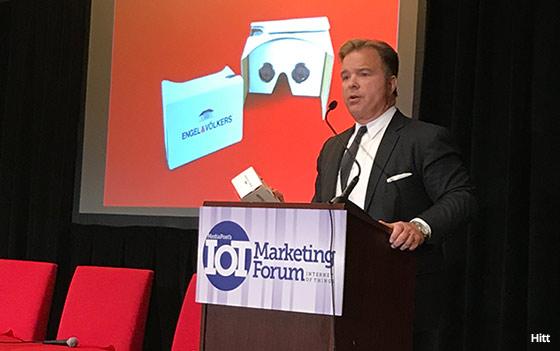 Virtual reality may be noted for its gaming capabilities, but businesses are starting to look at it as a component of their business.

One major use identified is in real estate, where one global real estate firm has jumped into virtual reality with both feet.

The details of the why and how were detailed at the recent MediaPost IoT Marketing Forum by Anthony Hitt, CEO of Engel & Völkers, a luxury real estate company based in Germany with its North American headquarters located on Park Avenue in New York. The company has 9,000 real estate advisors in 750 locations around the world.

Virtual reality may not be as big as augmented reality, as I wrote about here yesterday (Facebook, Snapchat Power Augmented Reality Well Past VR), but it is growing rapidly.

In his presentation, Hitt said that 171 million people will be using VR hardware and software by next year, making it an attractive option for the firm.

“Something happened about a year ago that changed the landscape,” Hitt said. “The New York Times distributed 1 million Google Cardboard viewers to the market. A lot of us in the virtual reality space believe that was the tipping point. That’s when, all of a sudden, there were enough consumers out there for this to make sense.”

The real estate firm built a VR platform for a new experience and selected a Ricoh camera and then outfitted all of its North American locations with the camera and its own version of Google Cardboard viewers, Engel & Volkers branded, of course.

Real estate shoppers now can go into any Engel & Völkers office, put on the viewers, and see any of the real estate listings and tour the properties via virtual reality. The real estate broker simultaneously sees what the shopper is seeing on a separate screen, so they can aid in the virtual tour.

The company decided to get 90% of its listings on VR within the first 90 days of launch, and is now halfway there and halfway through the time, Hitt said. The process involves re-photographing every listing.

“We’re already the first real estate brand in the world to have this virtual experience,” Hitt said. “Our offices in the rest of the world are doing the same thing.