The Escape Game Partners With Emma For Personalized Email 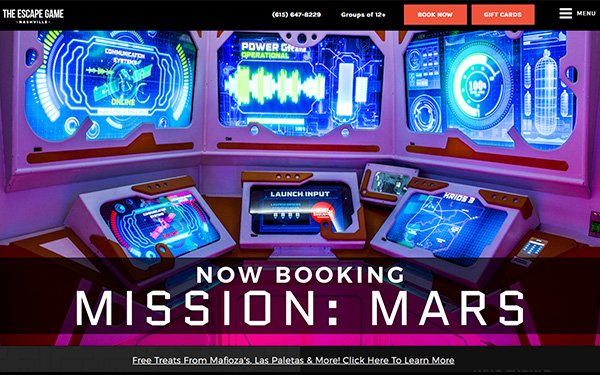 The Escape Game, an interactive events company, has partnered with Emma's email marketing services to re-engage past fans.

The Escape Game is an in-person game where players are locked in a room, with an hour’s worth of time to work together and solve a variety of clues to attain the exit key. Although headquartered in Nashville, The Escape Game has locations spread across the United States, including Orlando and Chicago.

Teddy Cheek, marketing & brand director at The Escape Game, and Max Magura, marketing coordinator, talked with Email Marketing Daily about how Emma has supported their branding across locations. The Escape Game has been working with Emma for less than a year, but has already tripled its subscriber list to over 182,000 email addresses.

“The big thing was to build out custom templates for each city we’re in, so that there is a cohesive feel and unified brand awareness, while still being personalized for every state a consumer is in,” says Magura.

Before the company would run a loyalty deal where, if someone purchased another game, they received a t-shirt. That was the end of the sales funnel, however, and communication ceased.

Magura explained how The Escape Game utilizes Emma’s automated features to send customers personalized emails based on which game, and in which location, they played. Emma can recognize what games players have played, and what content would be most relevant to them. Not only do players receive promotional discounts for future events, but The Escape Game also sends out an email series with a “behind the scenes” video illustrating how the game was set up.

“It’s been a huge time-saver,” says Cheek about Emma’s email automation. “As you can imagine, with each location we have different games. There’s simply no way to manage it all and keep your sanity without automation.”

The Escape Game recently partnered with Fox to help promote the upcoming re-launch of the television show "Prison Break" at SXSW. The company put together an original game where players had to break out of a prison, with stars from the show participating in the stunt.

Cheek explains that he used Emma's segmenting tool to develop an email list of past players based around the Austin area. The Escape Game sent an invitation to the special SXSW event to 1500 people who had never opened an email from the company before -- a risky bet that paid off in dividends.

The Escape Game was able to recapture a tenth of unengaged fans, attaining an open rate of 11% and click-through rate of 12%.

The Escape Game next plans to work with Emma to start a birthday email campaign series, giving customers a special birthday present a couple of weeks leading up to their birthday.

“It’s really a partnership, not just on a technical level, but also on a strategy level,” says Cheek.