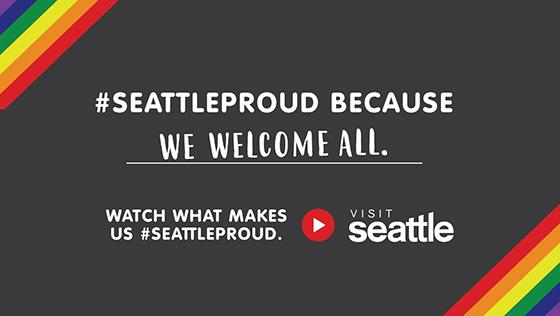 The campaign features interviews with members of the Seattle community, who describe the inclusive DNA of the city and the importance of standing proud not only this month (Gay Pride Month), but all year long. The clip ends with the line: 'We take pride in all people.'

"Diversity, equality and human rights have taken center stage in many conversations around the country and world this year," says Tom Norwalk, CEO, Visit Seattle. "As such, Pride is about more than just a party or a parade this year. It’s a time to stand loud and proud behind all people."

The clip will appear on cable via Revolt, as well as across paid efforts on YouTube, Facebook/Instagram and Q Digital properties, which includes LGBTQ sites Queerty, LGBTQ Nation and GayCities. Users are invited to spread the campaign's message using the hashtag #Seattleproud.

Offline, Visit Seattle is distributing hats and buttons in a rainbow of colors at Greater Seattle Business Associations (GSBA) events as well as other prominent LGBTQ gatherings in select U.S. cities.

These activities will culminate with the 43rd annual Seattle Pride Parade held at 11:00 am on June 25 in downtown Seattle to celebrate this year's theme as #Indivisible.