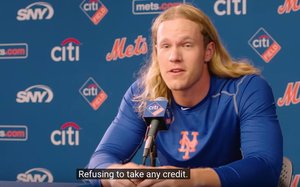 In the next iteration of its “If everyone said what they meant” campaign, Citigroup has unveiled a multimedia effort that spills onto the baseball field via its alliance with MLB’s New York Mets.

The ads support Citi’s Double Cash card and follow on the heels of its “If everyone said what they meant” effort with singer Katy Perry.

The use of Mets players, broadcasters and fans is organic as the financial services firm is in the midst of a 20-year naming rights deal for the team’s Citi Field stadium.

Syndergaard, currently on the disabled list with a partial tear of his right latissimus muscle, will take the lead in several aspects of the campaign, including internal and external activities for Citi when he returns from his injury as “part of its goal to enhance the fan experience at Citi Field and for Mets fans everywhere.”

"Citi does so much to make the ballpark feel like home for Mets fans, so I'm excited to officially be part of the Citi family,” Syndergaard says. “While I can’t wait to be back on the field entertaining our fans, I’m proud to be featured in a humorous new digital spot launching this week for Citi’s Double Cash campaign.”

In his spot, “Press Conference,” Syndergaard keeps the “If everyone said what they meant” theme going during a faux post-game interview session (see below).

The spot with Granderson sees him doing a pre-game “lucky handshake” ritual with a batboy, which they both admit “doesn’t do anything.”

Darling and Hernandez, both former players with the Mets, show their true emotions while announcing a game. “Here comes my dramatic 3-2 pitch voice ... Oh, an amazing foul ball. Plenty of time to show that on replay.”

Breuer is at the ballpark with friends yelling cliches and uninformed stats “so everyone thinks I know what I’m talking about.”

Barry Janoff is executive editor of NYSportsJournalism.com and a regular contributor to Marketing Insider.