Lagarde At Cannes: 'It Is Difficult For Women To Be Taken Seriously' 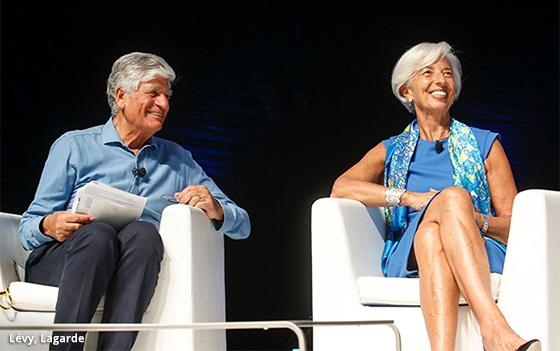 CANNES, FRANCE — "It is difficult for women to be taken seriously," said Christine Lagarde, IMF managing director. "I think one of the reasons I was elected chairman of the IMF had to do with the fact that the firm was doing very poorly — and I don't think any man wanted the job.

"It takes sometimes a rotten situation for a women to rise to the top. I take more pride that at the end of my term, I was reelected unanimously. People either have trust or they don't. In this case, they did," she says.

"When you look at the situation of young girls, you have to get to the root and invent solutions that deal with real issues," she says.

Now, when the IMF helps a country with stability and economic support, they must allocate a part of the budget to improve basic services. If transportation systems aren't sufficient, for instance, they must take into account the protection of passengers, particularly women.

The IMF has also "creatively" expanded its purview beyond emerging markets. The IMF is actively engaged in Europe as a provider of policy advice, financing and technical assistance, which was "much resented at the time," she adds.

The quest for gender equality will continue to be a struggle at the geopolitical level and requires input and cooperation from both men and women. One mind-boggling fact: The IMF studied 140 members to find 90% had guidelines in their legal systems or constitutions that discriminated against women.

Although many supporters wanted Lagarde to run for president of France, she has no regrets.

"I don't look back too much. I am doing a much better job than I would have ever done in the election. It may not be as glamorous or attract as much spotlight," but her role in the IMF helps to reduce corruption and make the world a better place. "I am using my time much better. I am not dismissive, but that is what I can do."