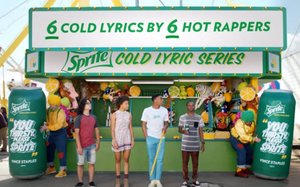 Directed by David Helman, the video depicts Staples stranded in a desert, spinning an empty Spritebottle to show him the way. He manages to find a diner, where he relishes drinking a full bottle of Sprite.

The new 30-second TV spot (below) is the latest element in Sprit’s “Cold Lyrics” summer campaign.

The seasonal campaign, which is part of the brand’s “Wanna Sprite” umbrella campaign, is based on Sprite’s offering limited-time cans and bottles bearing lyrics from six different rappers.

In the TV ad, Staples plays a carnival barker promoting the limited-time Sprite cans — including one with a Sprite-plugging “lyric” attributed to him.