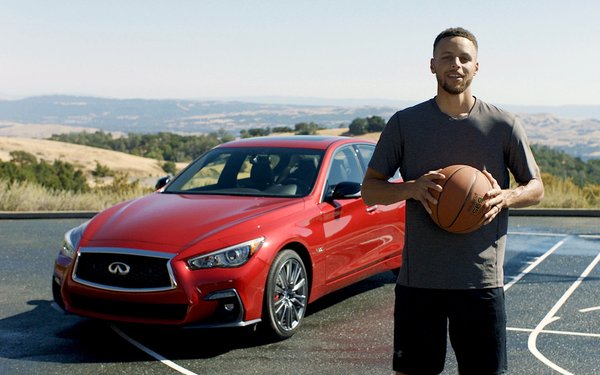 Infiniti Motor Co. has hired Stephen Curry as the brand’s global ambassador with his first campaign the launch of the all-new Q50 this summer.

Curry, a member of the NBA’s Golden State Warriors helped lead the team to a second NBA Championship earlier this month. The basketball star currently holds the top spot on the NBA's Most Popular Jersey list based on overall sales on NBAStore.com from April through June.

The athlete’s achievements and personal ambition to be at the top of his profession embody the spirit of Infiniti's new brand positioning "Empower the Drive,” according to Roland Krueger, chairman and global president, Infiniti Motor Co.

"Stephen Curry's drive to continue to set new benchmarks both on and off the court is an ideal parallel to the attributes of the Infiniti brand,” Krueger says in a release. “Just like Infiniti, he never stops pushing himself.”

Curry is a two-time NBA Most Valuable Player, four-time NBA All-Star and the NBA leading scorer in 2016. He was also named the Associated Press Male Athlete of the Year in 2016.

Infiniti joins Kia, which signed Cleveland Cavaliers LeBron James to a marketing deal in 2014, in affiliating with an NBA player. That automaker also works with the L.A. Clippers' Blake Griffin.