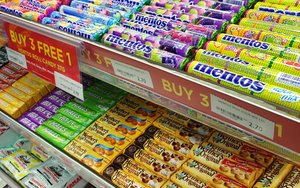 It’s no secret that, despite changing attitudes and habits, Americans as a group still consume substantial amounts of foods and beverages with high calories and high sugar and/or fat content.

However, according to one new survey, most claim that they want support for healthier purchasing and eating habits in the form of seeing fewer unhealthy choices and more healthy choices in food and nonfood stores, and at checkouts in particular.

In early December, nonprofit nutrition advocate the Center for Science in the Public Interest--an aggressive opponent of "junk food" and sugary beverages--commissioned Caravan ORC International to conduct a multiple choice-questions survey among a representative sample of U.S. consumers (1,024 respondents).

Nearly three-quarters of respondents said that they consider “unhealthy” foods and soda in supermarkets and convenience stores to be a “substantial” (31%) or “moderate” (42%) problem. Twenty-one percent and 5%, respectively, said that this is “not really a problem” or “not a problem at all.”

The numbers were very similar when asked about unhealthy offerings in other types of retail formats, like drug stores and toy stores. In addition, 27% and 45%, respectively, said that unhealthy items on restaurant menus are a substantial or moderate problem.

Similarly, 78% agreed strongly (35%) or somewhat (43%) that checkouts at grocery, hardware, office supply and other stores are stocked with “a lot of foods and beverages I don’t want.”

Sixty-seven percent agreed strongly (31%) or somewhat (36%) that they would “prefer not to have soda, candy, chips and other high-fat, high-sugar foods at checkouts at grocery stores.” Again, the numbers were virtually the same when asked about non-food stores. Seventy-four percent and 79%, respectively, said that they would prefer to see candy and soda located in the “regular aisle” for those products.

Conversely, one-third (35%) strongly agreed and 45% somewhat agreed that they would prefer it if food and non-food stores offered more healthy choices at checkouts.

Half (51%) admitted that they’d purchased candy, chips, soda or other snack food or sugary drinks at checkout in the previous month, and 76% said they felt regret after buying such items at checkout.

People with a household income under $35,000 a year (62%) were more likely to report that they made an unhealthy purchase from checkout once a month or more than people with incomes above $50,000 a year.

Three-quarters of respondents agreed that it’s hard for parents to shop with children at grocery stores because “there’s so much junk food,” and 86% agreed that characters on food packages, toys that come in cereals, candy at checkout, and other in-store marketing result in conflict between parents and children.

Nearly half (48%) said that in general, marketing and advertising of “junk food” aimed at kids is a substantial problem, and 35% a moderate problem.

Asked if they think it’s true that food and beverage manufacturers “pay supermarkets substantial amounts of money each year to place their products at eye level, in prominent positions, on end-of-aisle special displays and at checkout,” 85% said that they think that that statement is true.

That may be because these practices weren’t surprising to respondents: Half also said that they think that “supermarkets put the interests of food manufacturers before the interests of shoppers.”

The largest percentage (77%) indicated that getting through checkout quickly is a high consideration in choosing a checkout line, while just 18% said that picking a line with no unhealthy items displayed is a high priority (32% and 50% ranked that a medium or low priority, respectively).

Also, 79% agreed that supermarkets “should do more to make it easier for people to eat healthfully.”