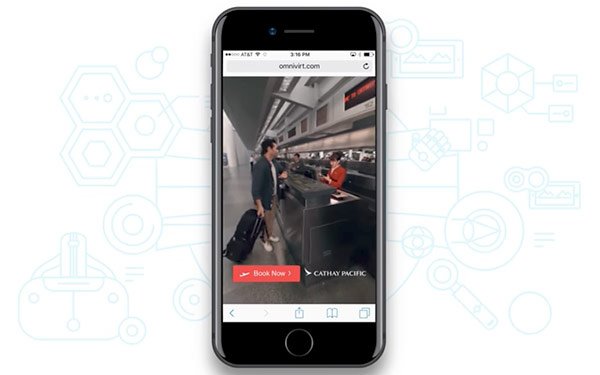 Released over the July 4th weekend, the ad transports potential Cathay travelers to the airline’s first-class cabin at the tap of a mobile device.

The spot will not run on Facebook or YouTube, as those platforms do not support native 360-degree video, Michael Rucker, OmniVirt co-founder and COO, told Digital News Daily.

OmniVirt’s hotspot technology “provides marketers with the ability to give their audience a choose-your-own-adventure experience,” he said. “Not only can viewers look anywhere they choose in the video, but now have the ability to interact [with] and learn more about the content that surrounds them.”

Once triggers are set and the ad is ready to go, OmniVirt serves the video across online channels.

“OmniVirt powers distribution of interactive 360-degree video across the web,” continued Rucker. “We help our clients serve these experiences across major web publisher inventory and on social media platforms via our web links.”

While it is a bit early for concrete data on the Cathay spot, Rucker added: “Users are extremely engaged with 360-degree VR video. Across the board we have seen an average uplift of 10x in CTR [click-through rate] and a 3x uplift in dwell time relative to flat 2D experiences.”

“For brands looking to dip their toe into the world of VR, I always suggest they start with 360-degree VR video,” concluded Rucker. “We all have a VR device in our pocket."

Rucker declined to offer details of Cathay Pacific’s spend for the ad.