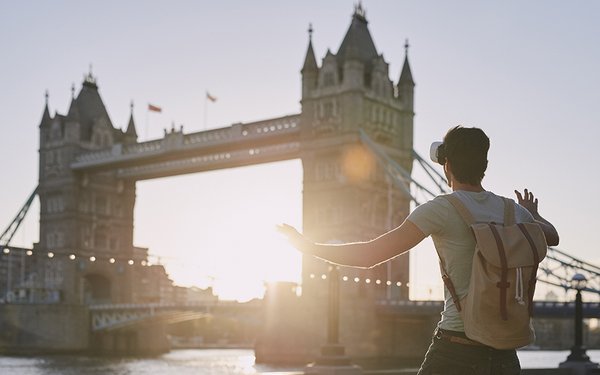 Virtual reality can’t logically replace a trip, but it sure can provide some insight into what a trip might be like.

Rather than the purchase of a physical thing, travel is generally about an experience.

And that’s where virtual and augmented reality come in.

A large majority (84%) of consumers globally said they would be interested in using VR or AR for travel experiences, based on a recent study.

Almost half (42%) of consumers believe VR and AR represent the future of tourism.

Consumers will be faced with offers of virtual reality walking tours of any hotel room they might book or various cabins of an aircraft before selecting a service class or seat.

It’s not likely that the actual booking or paying for a trip will occur through virtual reality, since it’s still easier to relay information about trip details, travel dates, passport information and the like to a travel agent or via PC.

In addition, most (57%) people have not ever used virtual reality, based on the Opinium survey. The study suggests that for the foreseeable future VR will primarily remain a platform for enhancing the trip planning process rather than for actual bookings.

Augmented reality has a role in travel as well. For example, in addition to Google translate being used to instantly translate spoken words, it can use the phone’s camera to translate words, such as on a sign, in real time.

However, virtual reality doesn’t appear to pose a threat to the travel industry.

In a survey of 1,000 adults globally, the touring company Italy4Real found that more than three quarters (81%) of consumers globally said VR cannot replace travel and almost all (92%) said a virtual visit would not replace an actual visit to a destination.

Virtual and augmented reality may not replace travel, but they certainly have the potential to greatly enhance a trip