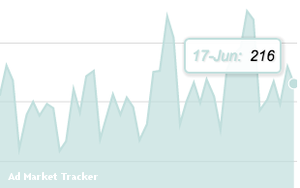 The U.S. advertising market grew 3.8% in the second quarter of this year -- largely due to an 11% gain in digital media.

Standard Media Index says this followed a 2.8% increase in the first quarter.

National TV brought down the overall results. In the second quarter, national TV advertising revenue was virtually flat -- down 0.8%. This followed a weak 0.8% gain in the first quarter.

These current results came amid higher-than-expected upfront advertising revenue commitments for next year’s TV season, starting in September. Upfront revenue growth is estimated at 4% to 6%.

In the second quarter, SMI says cable networks declined 4%, with broadcast networks rising 4% -- increases that were mostly attributed to the airing of the final three games of the NCAA tournament in April on CBS. A year ago, those games aired on cable network TNT.

Fox News Channel was up 11%, while CNN grew 21% and MSNBC jumped 40%. In addition, the big three broadcast networks climbed by 18%.

While broadcast network advertising revenues were up overall, this was not the case with prime time. The daypart was down 4% in the second quarter. Fox took the biggest hit, sinking 12.2% versus the second quarter of 2016. ABC slipped 3%; and CBS was down 6%. Only NBC grew -- with a 3% increase.

Local broadcast TV was up 10%, while syndication slipped 2% and local cable grew 22%.