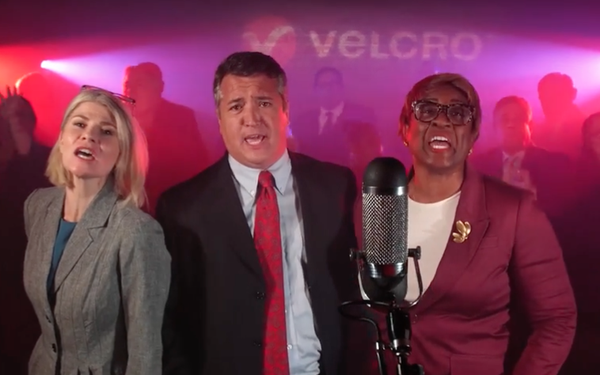 Brand success can come at a price. Just as Kleenex, Band-Aid, Rollerblade or any number of other companies whose brands have come to define their categories.

As a way to protect itself from becoming commoditized, Velcro Companies has launched a digital and social media campaign to encourage consumers to stop thinking of its namesake hook-and-loop fasteners as the generic name for the category.

“We are taking an unconventional approach to draw attention to an important issue and to encourage people to understand our heritage and future,” says Fraser Cameron, CEO of Velcro Companies. “The fasteners we invented are part of everyday life and widely imitated by other producers, and some people mistakenly call them 'Velcro' or use the term to explain the fastening mechanism.”

The brand has created a humorous music video in which a pack of lawyers plead with the public to no longer refer to all hook-and-loop fasteners as “Velcro.” The song, “We ® the World,” features lyrics pointing out that though the company’s patent on the product ended years ago, the brand's name and trademark still have meaning. “You think it’s awesome because we’re famous/But we’re lawyers and it’s causing us grief,” the chorus sings. The song acknowledges the company’s good fortune (even calling it a “first-world situation”), but points out the continued use of the product as a generic definition could result in loss of the trademark.

“Velcro brands are known for a number of different applications, [including an] ‘inspired by nature’ product,” Cameron tells Marketing Daily. “We definitely want people to know Velcro is the brand. As long as they know it’s [to be used as] an adjective, that’s good.”

While it’s likely unrealistic to expect everyone, everywhere to cease referring to the hook-and-loop fasteners as “Velcro" on every reference, even a little consideration would be helpful to the company as it looks to leverage the Velcro brand into other categories, Cameron says.

“As the range of our products becomes broader and broader, the value of our trademark becomes more and more important,” Cameron says.

The video has launched on YouTube and will include some paid digital advertising. The big push will come through Twitter, as the brand pushes out the message in conversation where Velcro is being used generically.

“We’re trying to intervene in that conversation,” Cameron says. “But we’re trying to do it with the fun spirit of the company that we are.”