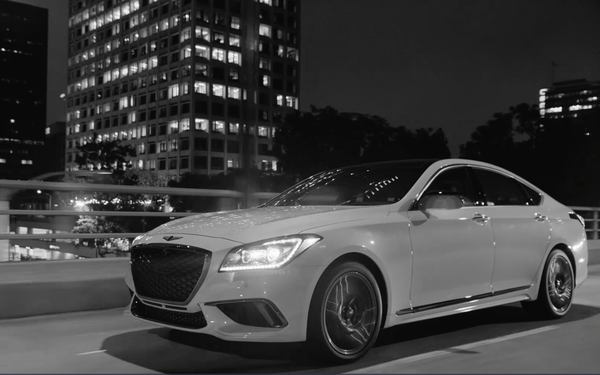 TEN: A Discovery Communications Company created the series, “What Do You Want,” to support the launch of the Genesis G80 Sport. The films depict the answer to the question, “If you were creating a new luxury performance vehicle to compete against the norm, what would you design?”

The target for the vehicle is automotive enthusiasts, since they are highly influential, says Kate Fabian, senior group manager, Genesis marketing.

“TEN’s enthusiasts are especially influential and make between four and six make/model recommendations a year,” Fabian tells Marketing Daily. “This provides us with an opportunity to not only reach the auto enthusiast, but the consumers that those enthusiasts influence/reach as well."

Using branded content allowed the brand to authentically engage the auto enthusiast by acknowledging, and actually weaving them into, the content, she says.

“With video, it also opens up opportunities as it travels well across platforms,” she adds.

Genesis last used branded content with another effort via TEN (The Enthusiast Network).

“This latest initiative is actually a follow-up to a program that we had done previously with TEN called Genesis of the Genesis in which we activated TEN’s enthusiasts,” she says. “It performed extremely well with aided brand awareness, favorability and purchase intent scoring within a range of 3 - 14% of the highest numbers ever recorded in the automotive space by Millward Brown. We value branded content as it gives authenticity to our message through our trusted partners.”

The enthusiasts in the films break down the details of design, performance and interior luxuries that are personally important, while expanding on why their design concepts are different from the norm. The series reveals their passions and shows why the Genesis G80 Sport is the luxury performance vehicle that deserves consideration. Genesis is Hyundai's luxury brand.

The program intersperses the enthusiasts’ responses with footage of the G80 Sport shot in downtown Los Angeles that demonstrates how the vehicle checks off each of their suggestions with style and prestige.

Graceful passes against modern architecture reveal the G80 Sport design aesthetic with a focus on the grille. The vehicle’s interior luxuries and technologies are highlighted as the G80 Sport glides through the city demonstrating the 365-hp and 376 lb-ft of torque found in the new 3.3-liter twin-turbocharged V6 engine.

The campaign includes one 90-second anthem film, along with two 30-second and two 15-second cutdowns.

This series for G80 Sport follows TEN’s successful campaign supporting the initial Genesis brand launch in October 2016. According to a Millward-Brown study, the campaign significantly over-performed in each measured area including aided brand awareness at 428%, brand favorability at 136%, purchase intent at 173% and consideration at 281%. All percentages are in terms of industry benchmarks.

“What Do You Want?” will be socially distributed along with a series of smaller segments highlighting the enthusiast’s definition of luxury experience and performance. The cut downs will play out on MotorTrend and Automobile’s Instagram and Facebook pages. Additionally, the clips will run as video pre-roll across MotorTrend. Other program elements include an article page, presence in the MotorTrend and Automobile apps, and print support.