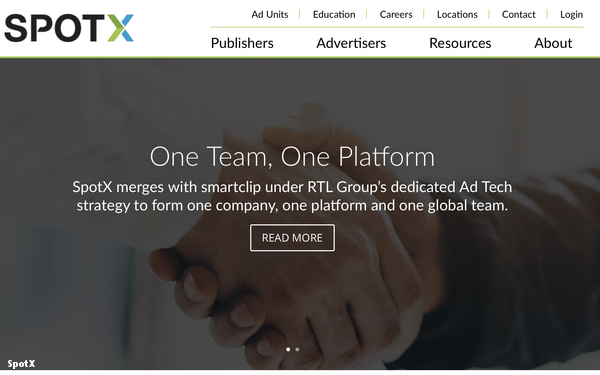 The video ad-serving platform SpotX announced today that it was linking up with Amazon Web Services, allowing for interoperability on the tech giant's cloud platform.

“The integration streamlines the workflow for joint customers... and eliminates the need for custom engineering. It also positions SpotX as one of the preferred monetization options for clients using Elemental Media,” Jeremy Straight, senior VP of strategic partnerships for SpotX, told Digital News Daily.

“The integration also allows them to use AWS Elemental and their server-side ad insertion [SSAI] product while continuing to use SpotX as their primary ad server, and it gives them more ad stack choices and more control over their inventory outside of walled gardens like Google, Facebook, and Comcast.”

AWS’ Media Services platform creates building blocks for streaming video, allowing companies that, in the past, would not have been able to launch a streaming video platform.

The addition of SpotX marks the next phase of this shift, as video ad platforms take advantage of AWS’ scale to bring more clients into the targeted video fold.

For companies like SpotX, it also serves as a means to bring in new potential clients that already use AWS, but may not be familiar with the video ad delivery products.

"[T]he opportunity will open up more referral business from Elemental clients in regions where we may not be as strong,” Straight says. “We are already speaking about referrals for clients in [the Asia-Pacific region].”