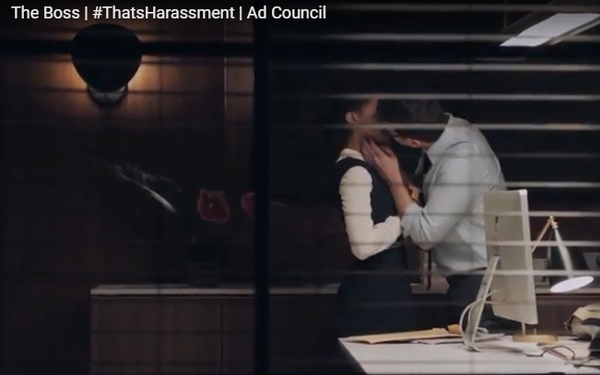 The creative, written and directed by Sigal Avin and executive produced by actor David Schwimmer, depicts various cases of sexual harassment in the workplace, all based on real events.

A film was originally launched in April 2017, but due to the heightened awareness of the subject in the aftermath of the Harvey Weinstein scandal, the Ad Council is nationally distributing 30-second cut-downs of three of the six original films to media outlets nationwide, including Amazon Prime Video, CBS, The CW, Fox Networks Group, Freedom, Hulu, Showtime and Starz. Shorter 10 and 20-second cut-downs will be available on Extreme Reach and PSA Central.

"We’re building on the awareness that’s already been generated and providing resources to potential victims, bystanders and businesses," says Ellyn Fisher, senior vice president of public relations & social media, the Ad Council. "We all have a role in combatting sexual harassment, and our goal is to empower everyone."

She adds that the team did not work with a traditional agency, unlike most Ad Council projects, because the creative had already been developed and executed.

In addition, for the duration of 2018, the New York City Mayor’s Office of Media and Entertainment will air #ThatsHarassment PSAs on Taxi TV, bringing the campaign to video screens in 13,000 NYC taxicabs and generating well over 100,000 impressions per day, reports Fisher.

The PSAs will also run on NYC Media, the City’s official broadcast network that claims a reach of over 18 million households.

The campaign is also encouraging employers to use the films for training to proactively address and prevent sexual harassment in the workplace. A digital toolkit can be downloaded here.