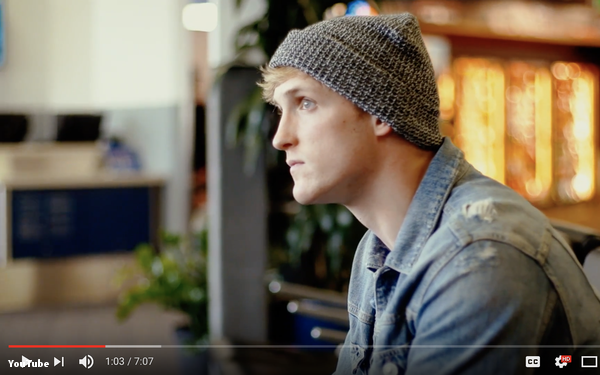 YouTube creator Logan Paul has published his first video to the platform since being reprimanded for a controversial and since-deleted video.

Paul’s new video is a stark departure from his past videos, which would often feature wacky pranks. Instead, he is seen interviewing people who had attempted to commit suicide, and encouraging anyone with suicidal thoughts to seek the help they need. He also pledges $1 million to suicide prevention organizations, including the National Suicide Prevention Lifeline.

"It's time to start a new chapter in my life as I continue to educate both myself and others about suicide. I'm humbled and thankful to say this is just the beginning,” he says in the video.

Paul’s YouTube channel had been silent for the past few weeks, an absence stemming from a video he filmed in Japan in which and his friends discovered the body of a man who had recently committed suicide.

Paul subsequently removed the video and posted an apology, but the damage had been done.

YouTube responded to the controversial video by putting on hold projects that Paul had been working on for its YouTube Red subscription service, and by removing Paul’s channel from its “Preferred” partners list.

YouTube is also putting in place more stringent rules for content and the ability to monetize channels and videos. Among the steps is an “intelligence desk” designed to spot inappropriate videos, according to BuzzFeed News.

YouTube’s changes to its monetization rules were meant to soothe advertisers and other creators, who were concerned that inappropriate content such as Paul’s video could be published for nearly a day before being taken down by Paul himself.

Advertisers in particular were angry that content that was clearly not “brand-safe” could be in included in YouTube’s “Preferred” program, where many marketers pay a premium specifically to ensure their ads appear next to premium, safe content.