Postmates Gets 'It' ... And Its Consumers, Too 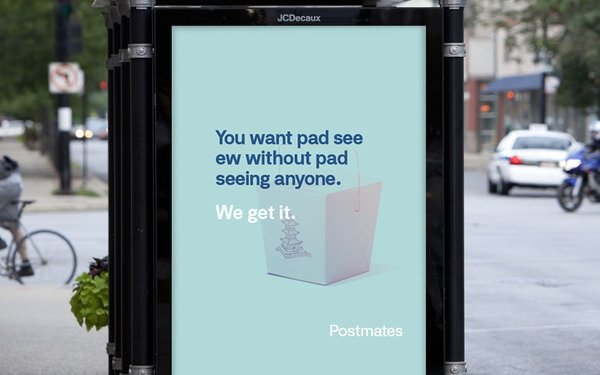 In the age of the Internet, consumers can dial up anything they want, at nearly any time, and have it delivered right to their doors. Postmates, an app that offers that delivery, gets that. And it gets its customers, too.

The company this week launched a new marketing campaign (from agency 180LA) proclaiming, “We get it,” referring to both the physical act of retrieving needed products, as well as the desires behind those products.

“The tagline plays on how we use data to better understand our consumers and what they want, while also emphasizing how we can literally deliver them anything, anywhere, anytime,” Lizz Niemeyer, director of brand marketing for Postmates tells Marketing Daily. “From pad see ew to Halo Top, vodka to toothbrushes, the number of Postmates use cases are endless. Postmates is the only on-demand delivery company that can deliver anything from anywhere.”

Inspired by some of the app’s order trends from last year (such as vegan orders in Santa Monica and alcohol orders during key points of political discourse), outdoor ads offer cheeky headlines like, “When you're ‘vegan’ but you're drunk. Carnitas Tacos," and “When you want to ironically toast the country that secretly controls ours. Vodka."

“We're taking a fun, tongue-in-cheek run at this city with this campaign, and if nothing else, it gives the people of L.A. something to look at while driving, other than their phones,” said Jason Rappaport, creative director at 180LA, in a statement.

While the effort currently launched in Los Angeles (the agency created more than 50 customized executions that are strategically placed throughout the city, specific to iconic restaurants and neighborhoods), it will be rolled out nationally via digital executions and will be expanded into other markets in the coming months, Niemeyer says.