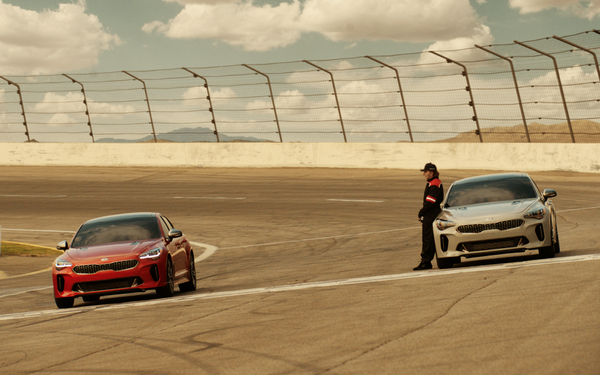 Kia Motors America has revealed that its Super Bowl spot will feature its high-end Stinger sports car and two-time Formula One and Indianapolis 500 champion, Emerson Fittipaldi.

It will be featured in a 60-second spot from Innocean’s David + Goliath airing in the third quarter of the Super Bowl, which marks Kia’s ninth consecutive year advertising in the broadcast.

“Two Kia Stingers. An abandoned racetrack. And two eternally youthful legends who have logged seat time in some of the most powerful and exotic cars in the world,” according to a statement released by the company, with a 15-second teaser.

Designed in Frankfurt and developed on the Nürburgring, the all-new Kia Stinger’s six-year journey from concept car dream to the highest performing production model in company history, according to the automaker.

Kia’s Super Bowl spot last year featured actress Melissa McCarthy and the Kia Niro. The 60-second "Hero's Journey" ran in the third quarter. Set to Bonnie Tyler's "Holding Out For A Hero," McCarthy's first save is whales, although a breaching one propels her into the boat she just left. She is also a tree-hugger, until the tree she's holding is chopped down. "It's hard to be an eco-warrior, but it's easy to drive like one," closes the ad, which was named one of the year’s funniest by Ace Metrix.

Kia joins other automakers in the big game, inching Hyundai and Lexus. Super Bowl ads for this year's event reportedly cost an average of more than $5 million for a 30-second spot, according to Sports Illustrated.

Mercedes Benz has elected not to buy a spot, but instead will host a "Last Fan Standing" game where using smartphones, thousands of Mercedes fans will be invited to compete by placing their finger on an AMG that will be moving across their smartphone screen throughout the Super Bowl (and potentially beyond).

The rules are simple: You take your finger off, you’re out. The last person touching the car, wins it. “Last Fan Standing” will test gamers’ stamina and determination as the car encounters different terrain and obstacles. As players drop out, a live counter will show the number remaining and how long they’ve managed to hang on.