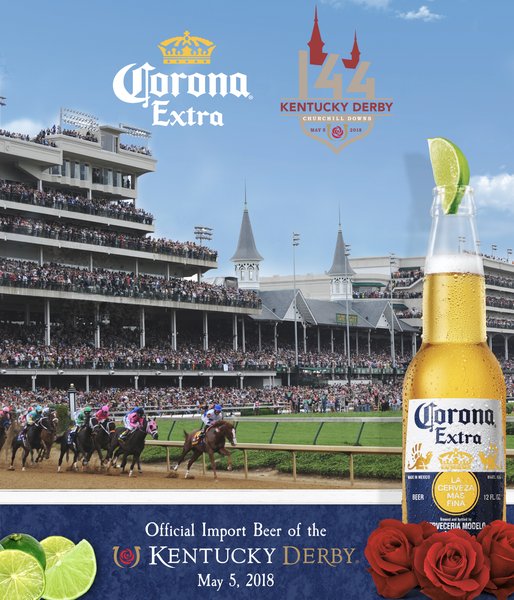 Constellation Brand’s Corona Extra has signed on as a new Kentucky Derby sponsor.

The iconic race falls on May 5 — Cinco de Mayo — for the next two years, which the Mexican beer brand will play up. The deal makes the brand the official import beer of the Kentucky Derby presented by Woodford Reserve.

Woodford Reserve takes over as title corporate sponsor following the exodus last year of Yum Brands, which had the position since 2006.  Woodford has been the "official bourbon of the Kentucky Derby" under a separate sponsorship deal since 1999.

This is Corona Extra’s first involvement in the horse race, which draws in approximately 19 million viewers and 160,000 attendees for one of the biggest sports events in the country.

"For Corona, Cinco de Mayo is our unofficial start to summer, and we will be bringing the fiesta and beach vibes to the infield at the historic Kentucky Derby," said John Alvarado, vice president of marketing for Corona Extra, in a release.

As part of its sponsorship, Kentucky Derby attendees can join the Corona de Mayo fiesta at brand's activation zone in the Churchill Downs infield. Corona will activate retail point-of-sale throughout the U.S. and will sponsor Derby viewing Cinco de Mayo parties. The brand will use social media to engage fans with the sponsorship activities.

Angry Orchard has also signed on as the official cider of the race. Race attendees will find that the Starting Gate Lounge at Churchill Downs has been renamed the Angry Orchard Club. The venue offers “breathtaking views of the Kentucky Derby race and iconic twin spires from directly alongside the homestretch of the turf race course,” according to the event’s website.

Previously, Stella Artois was the official beer sponsor, going back six years. The brand will not be affiliated with the race this year, according to the Louisville Business First, which reports that two more beer sponsors — a craft beer and a domestic beer partner — will be named at a later date.