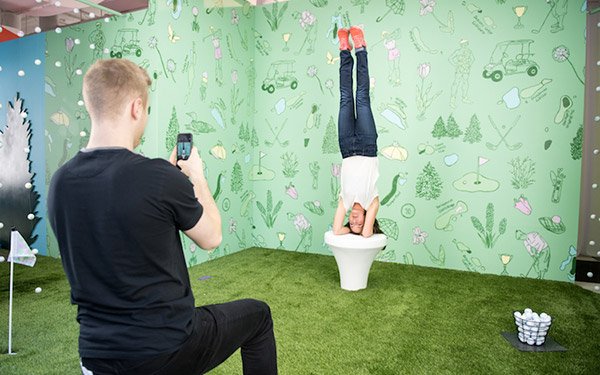 There is never a better chance to sell yourself than when millions of visitors converge for a massive event like the Super Bowl. Which is why Explore Minnesota Tourism is introducing what it calls the first, single-brand installation in downtown Minneapolis to change perceptions of the state.

This free experience is designed in partnership with Minneapolis-based advertising agency Colle McVoy and produced by Street Factory Media in Minneapolis.

These five main rooms and several smaller scenes are designed by local artists — such as Chuck U, By She She and Girl Friday — to raise awareness about Minnesota's variety of destinations, four-season activities and attractions.

It was an extreme labor of love to execute this project in time for Super Bowl attendees.

Both agency employees and clients had to wear various hats and do a lot more “envisioning” before anyone was able to see it come to fruition, says Neerland. This involved transforming a raw space that hasn’t had a tenant in 15 years, devoid of heating or sprinkler system to receive walls and special lighting, to help generate great photos.

Another production challenge was for the artists. For example, Chuck U. worked six, 16-hour days to get his installation complete.
And the exhibit is exceeding expectations. There have been more than 10,000 people in the first three days of a 10-day experience. Further, there are nearly 7,000 mentions of #OnlyinMN since January 25, up 17% in hashtag usage compared to the same time the previous week (January 18-23).

However, there are no plans to move the exhibit to other locations. That said, there is hope that some elements will live on. "Explore Minnesota is all about selling the uniqueness of Minnesota experiences, and we’re always looking for opportunities to do that," says Neerland.