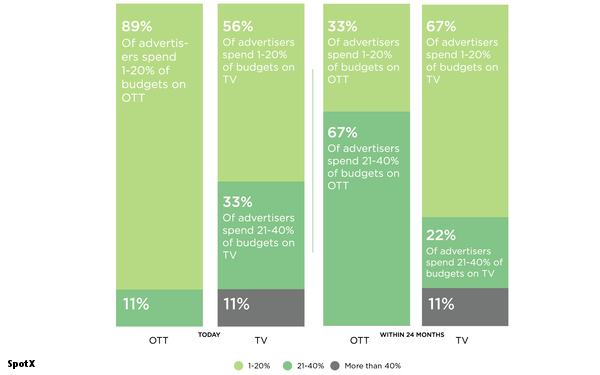 Video advertising on over-the-top video services has lots of room to grow, and data-driven solutions utilizing third-party data will need to be a key part of that, according to a new study commissioned by the video ad serving platform SpotX.

The study, called “TV is Total Video: Predicting OTT and the Future of Video Advertising,” which was conducted by the media research group Kagan (owned by S&P Global Market Intelligence), found that 85% of executives surveyed from OTT providers, pay-TV providers, content owners and advertisers said that third-party data will be an important driver of the OTT ad market.

“Last year, we heard about brands and agencies thinking about shifting ad dollars but these survey results prove that advertisers are now legitimately changing their strategies because audiences are increasingly consuming content in OTT environments, and third-party data is also a critical component of the adoption of audience-based buying and selling of ads,” Mike Shehan, the co-founder and CEO of SpotX, told Video Insider. “All in all, it’s clear that to reach their audience today and in the future, advertisers will need to incorporate OTT into their traditional TV plans.”

Of course, like any new market, OTT video has some growing pains, and that is reflected in the report. While the potential for interactive, targeted advertising is enormous, there remains a lot that has to be done to get there, starting with consistent measurement across platforms.

“Beyond fragmentation issues, this report revealed that advertisers still need more people trained in how to buy audiences across multiple platforms and, of course, measurement remains a key challenge,” Shehan says. “Marketers are still trying to figure out how to plan their cross-platform buys and which metrics matter most in OTT, and then technology must be ready to meet those demands.”

The advertisers surveyed were unanimous that third party data "was a strong driver for the adoption of audience-based buying and selling of ads," according to the survey, with 94% of content owners in agreement.

The OTT marketplace is mature, in that consumers are wholeheartedly embracing new services and platforms, and advertisers and content owners appreciate the opportunity it offers. However, as the SpotX survey shows, many of the changes to come to the ad business are still nascent, but poised to accelerate over the next few years.