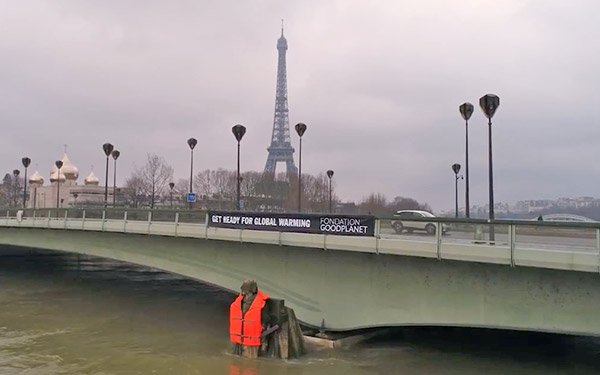 After the recent flooding in Paris, France-based agency Rosapark approached the GoodPlanet foundation about an out-of-home activation to raise awareness for climate change.

The Zouave statue, a monument set next to the Pont de l'Alma along the Seine, and the city's gage for measuring the river's rising level, has been outfitted it with a giant life vest and banner reading "Get Ready for Global Warming."

This was an internal passion project for the agency. Two days ago, agency executives presented the idea to Yann Arthus-Bertrand and his foundation.

"As a communications agency, it’s our duty to spread the word to the maximum number of people. We need to take action, at all levels," says an agency spokesperson.

This isn't the first time the agency has waded into political messaging. Rosapark has been active in social messaging, in particular, with Innocence en Danger, an NGO aimed at protecting children from all forms of sexual abuse.

As of now, there are no plans to expand this project to others cities or statues.

"But we’d be more than happy to do more," says the spokesperson, adding the activation will hopefully remain up until "someone" takes off the jacket.