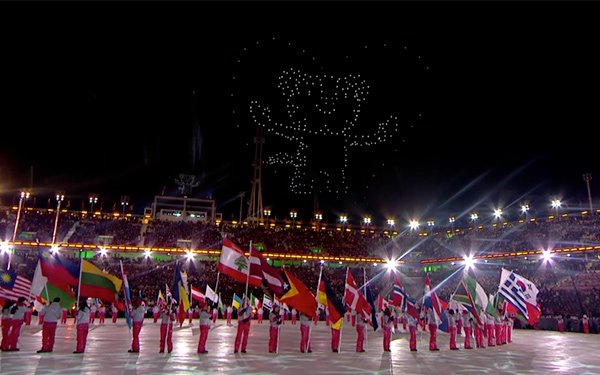 While Amazon and others explore using drones for deliveries, Intel continues to tap the flying devices for entertainment.

After a record-breaking Olympics opening using more than 1,200 drones flying in patterns simultaneously, Intel used 300 of its Shooting Stars drones for the closing ceremony.

The drone light shows use hundreds of drones, all directed by one pilot. The opening drone show for the Olympics was taped in advance, but the closing air show was performed live.

During the closing ceremony, the drones flew in color in the shape of Soohorang, the white tiger that served as the Olympics mascot.

When the weather permitted it, the drones were flown to celebrate nightly victories during the games in South Korea. The drones created the PyeongChang logo and athletes including skiers, hockey players and curlers across the night sky.

These drones, which each weigh three quarters of a pound or slightly more than a volleyball, are custom-made for entertainment. They have LED lights that can create more than 4 billion color combinations and be programmed for animation.

Intel created an algorithm to automate the animation creation process by using a reference image, then calculating how many drones are needed, along with where to place them for the fastest path to the image creation in the sky.

The drones have been used for a light show at Disney World and, most recently, in coordination with the Fountains of Bellagio in Las Vegas.

The drones are made with a frame of flexible plastic and foam. The entire fleet is controlled by one pilot and one computer. They aren’t designed to carry things, and that’s the key. While multiple companies work to create drones that can carry various things, Intel is focused on using drones for marketing.

There continue to be plenty of drone tests of various types. For example, Domino’s has been testing pizza delivery by drone in New Zealand, UPS has been working to deliver blood for transfusions by drone and Amazon has filed a patent for a drone fulfillment center.

Not all have worked out as planned. GoPro recently decided to get out of the drone-making business, citing future regulation and intense competition.

While those and other trials remain in the world of testing, awaiting the formation of ultimate regulations and technological advancements, Intel’s drones are being showcased by the hundreds to millions of people around the world.

The Intel drones can create logos and mass advertising in the sky. That is the IoT version of out-of-home advertising.