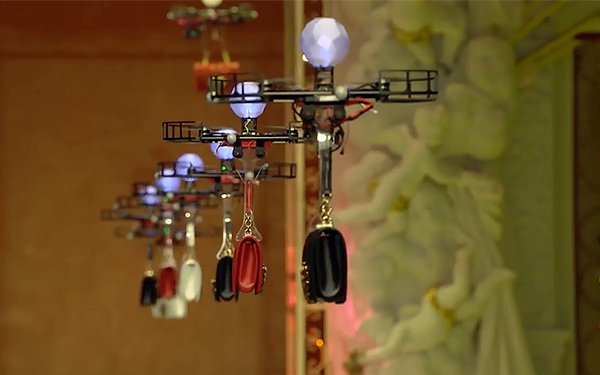 Drones may not yet be delivering pizzas from Domino's or products from Amazon to the masses, but they are being tapped for major marketing opportunities.

Intel has been taking its Shooting Stars drones to fly to areas with large crowds and plenty of publicity.

Now luxury fashion designers Domenico Dolce and Stefano Gabbana have used drones rather than models to carry handbags down the runway at the company’s fashion show in Milan.

The drones were "escorted" by a person on each side of the runway, presumably just in case, but the drones did properly behave.

Attendees were asked in advance to turn off their phone’s WiFi or personal hotpot connections, and then the show began. The drones came out one by one, each carrying a designer handbag.

In addition to the eight quadcopters surprising and delighting the in-house audience, the drone event drove worldwide media coverage.

Intel has done the same, with its drone light show at Disney World, its record-setting 1,200-drone light show to open the Olympics and its 300-drone live show to close the event, as I wrote about here (Intel’s 300-Drone Light Show Closes The Olympics).

The drone show by Dolce & Gabbana could not have been overly costly, and while it may be perceived by some as somewhat gimmicky, it’s bringing worldwide attention to the brand.

Low cost, high payback: a key to getting the Internet of Things off the ground.