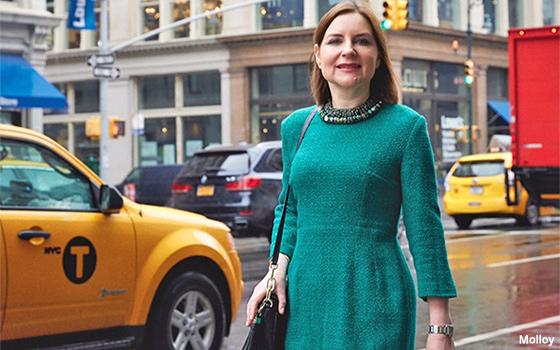 At Siegel+Gale, chief marketing officer Margaret Molloy spends a lot of her time talking about brand building and influencer marketing. Now, with St. Patrick’s Day just around the corner, she is putting her advice into action through a passion project tied to her pride in her Irish heritage and fashion.

The #WearingIrish initiative is designed to raise awareness about Ireland’s talent and capabilities in the fashion sector. After originally launching as a social media influencer project in 2016 to encourage people to post pictures of themselves wearing Irish designers in March (to coincide with St. Patrick's Day), this campaign is expanding to tell "the untold story of contemporary Irish fashion design."

"As a marketing professional, the challenges and the opportunity is to apply a career’s worth of marketing best practices to the program," says Molloy.

As part of the branding effort, a competition is awarding eight Irish fashion and accessories designers the opportunity to fly to New York City to participate the WearingIrish NYC 2018 program in May at Bank of Ireland's innovation Startlab center. Applications close on March 5 and winners, selected by a panel of judges, will be announced on March 16 in New York.

The selected designers will participate in a showcase program where they will spend 48 hours meeting potential customers, networking with guests and forging connections to accelerate growth. As part of the event program, Molloy will curate panels on Ireland and creativity, brand building and the business of fashion in the U.S.

Organizations supporting the event include the aforementioned Bank of Ireland Startlab, as well as the Department of Foreign Affairs and Trade, through Ireland’s Consulate in New York, Tourism Ireland, CIE Tours and Enterprise Ireland.

To make it easier for people to discover Irish fashion, the campaign publishes an online directory of fashion and accessories.