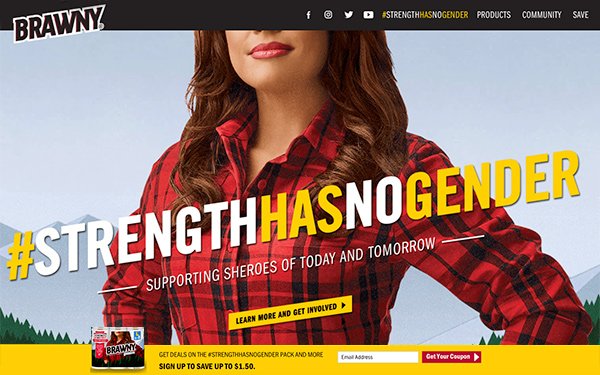 March is Women’s History Month, and agencies and brands are out in full force with campaigns devoted to an array of gender-related issues.

Brawny and AOR Cutwater continue the third year of the paper brand's #StrengthHasNoGender campaign that salutes female empowerment by again replacing the iconic Brawny man on its packaging with a woman.

This commemorative packaging will be available in retail locations nationwide during March.

Brawny is also introducing a series of short, original films featuring the stories of three "sheroes" at Brawny.com/StrengthHasNoGender, as well as inviting people to submit their own stories about female heroes using the hashtag #StrengthHasNoGender.

In addition, with the help of more than a dozen female comic artists and animators, select "shero" stories will be transformed into animations or illustrations for Brawny digital channels. Lastly, Brawny continues to partner with the advocacy group Girls Inc. and will contribute $100,000 in support of its many different programs.

Smirnoff and Spotify, along with agencies 72andSunny, Taylor and MKTG, are partnering for a global campaign based around the Smirnoff Equalizer, an API (application programming interface) experience that provides users with a percentage breakdown of the number of men versus women artists they have listened to in the past six months.

For those whose listening preferences skew male, the Smirnoff Equalizer will then deliver an “equalized” playlist tailored just for them and their music tastes.

The platform also has a personalized slider, where users can increase or decrease the ratio of men to women artists in their playlists to experience more "inclusive listening."

Plus, Smirnoff is releasing special-edition “Phenomenal You” Smirnoff No. 21 vodka bottles, which are not available for retail purchase. The bottles are being gifted to 100 women around the world, along with a donation made in each of their names to the advocacy group She Runs It.

Baltimore-based Planit is launching its first #rADicalwomen social media campaign on March 5 to acknowledge women in advertising and technology. The campaign is a passion project led by Planit creative director Jess Brown who feels many within the industry lack an awareness about women's contributions.

For instance, while women make up 46% of the advertising industry, they account for just 11% of creative directors.

The #rADicalwomen campaign will include daily profiles of creative women, such as graphic designer Susan Kare, Caroline Jones, one of the first African-American executives, and copywriter Phyllis Robinson, as well as behind-the-scenes stories posted on Instagram about the reasons staffers selected the profiled women.

On Thursday, March 8 (International Women’s Day) the agency will release a video of Brown further discussing the inspiration behind the campaign and "how she wants to keep the conversation" going beyond IDW.

ColorComm is supporting women's history month by introducing its first-ever ColorComm Service Day on Saturday, March 3, in seven network chapters across the U.S. The platform that addresses diversity among communications, marketing, media, and advertising industries will see members assist with the homeless, provide resources to residents in nursing homes, mentor youth in STEM education, and help families in need.

Although the organization regularly participates in community activities throughout the year, this is the first year that each ColorComm chapter will come together on one day to give back their time and resources.

"There is power in numbers, and we believe it is so important to use this time and this month tending to those who are in need," says Lauren Wesley Wilson, president/CEO ColorComm. The cities included are New York, Washington, D.C., Chicago, Atlanta, Los Angeles, San Francisco and Dallas.

Y&R, Berlin Cameron and women's advocacy group Ellevate are hosting a half-day event on International Women’s Day in New York City with speakers including Kristy Wallace, CEO of Ellevate and Meg He, co-founder of Aday. The event will also include pop-ups where attendees can shop and network.