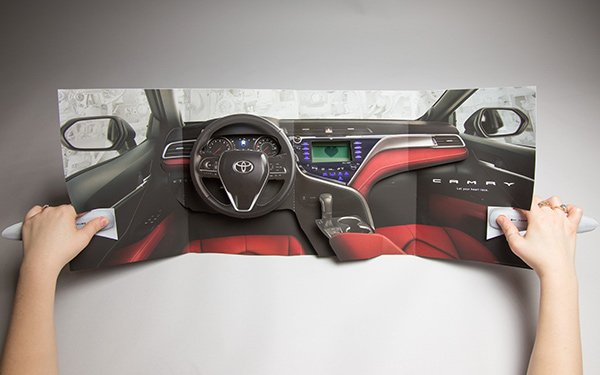 Toyota has become the first car manufacturer to bring electronics and a new car smell to life in an ad. It took more than eight months to design and create, but the first-of-its kind trifold ad insert in InStyle magazine went out to about 50,000 U.S. subscribers in the March edition.

Work on the ad, designed to allow consumers to experience the new Camry 2018 edition, began in April 2017. Toyota worked with its agency of record, Saatchi & Saatchi, along with multiple vendors. The campaign launched in September. The print piece is integrated into broadcast and digital media.

The first step was to take the image of the Camry’s interior and print it on many separate pages.

“The most difficult part was the technology, because it didn’t exist that thin,” said Rachel Dallas-Noble, the print producer at Saatchi & Saatchi. “We had to find really skinny wires that would take a fold. The screen is in the middle of the gatefold.”

Batteries were another challenge, she said. Originally the piece had between six and eight batteries. The U.S. postal service would only allow two.

The leather scent printed on white stock and cut to back up the pop-up dashboard. When it's closed, it is compressed so the scent is not noticeable.

Structural Graphics assembled the gatefold in a layered 3D effect, including the wiring and batteries. Once the final prototype met approval, assembly began by hand.

Those viewing the ad can grip door handles, placing their thumbs on the sensors. When the handles are pulled open, the reader sees an insert with an electronic dashboard light up, complete with a pulse rate. The reader also can smell the leather.

“It takes your pulse rate, so if you pass on the piece to someone else and they try it the sensors will take their pulse rate,” Dallas-Noble said.

The campaign, meant to create awareness, could have expanded a step further, sending the pulse rate to a database where marketers could analyze the data to determine the probability of whether the subscriber will buy the car. Perhaps next time.

Dallas-Noble said that adding an Apple Watch would have allowed the ad to take the pulse rate and transmit the information to a database. “It would have taken another year,” she said.

The agency called the insert an “awareness piece” to build interest in Toyota’s new car.

InStyle Magazine was selected based on Toyota’s and Saatchi’s strong relationship with Meredith, formerly Time Inc., and the magazine’s editorial theme of design and fashion focus.