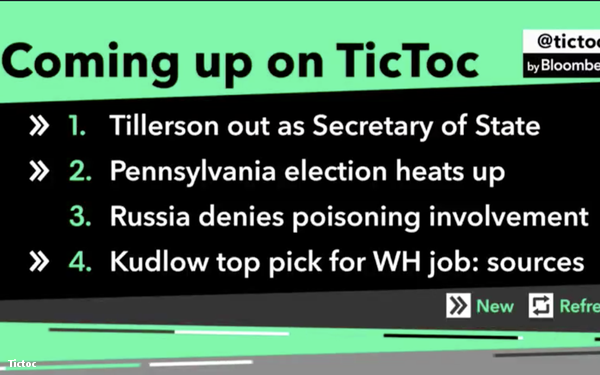 TicToc, the 24-hour video news channel created by Bloomberg and currently available exclusively on Twitter, is planning more live events in a bid to increase its reach and scale.

Speaking on a panel at SXSW in Austin, Texas Monday, M. Scott Havens, global head of digital for Bloomberg Media, said that the channel -- which only launched in December -- has had the most success when covering live events where video is a natural fit.

“People love breaking news and breaking live events,” Havens said. “We've done State of the Union, Space X launches etc, and we can see really high concurrency. As we spin up the global infrastructure to do it around the clock and as Twitter's product evolves, we'd like to do five to six live events at the same time in places like China, Europe and South America.”

Twitter, which is banking on live video to turn around its business, sees TicToc as a means to get users talking about the news they watch on the service, making the platform a one-stop shop for news consumption.

"It's timely, [with] the timeless[ness] of the content that is happening around the world. And when you have that, it's like a fire -- we've seen massive consumption,” said Kay Madati, global head of content partnerships for Twitter. “750,000 daily viewers and 1M daily views -- it's working.”

Twitter is already a major source for news  -- consider that President Trump fired Secretary of State Rex Tillerson on Tuesday morning in a tweet -- but the video element is key for driving engagement and monetization.

“It's both a great business opportunity and a mission-driven opportunity for the next generation of consumers,” Havens said, adding that the service is currently supported by seven launch sponsors.