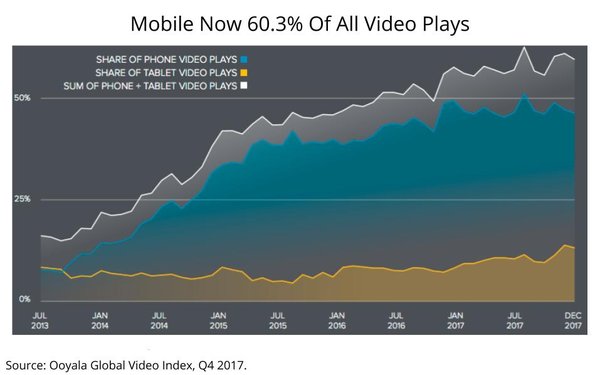 The mobile video market continues to grow at a steady clip, with mobile now accounting for 60.3% of all global video starts, according to the Q4 2017 Global Video Index Report from video software and services provider Ooyala.

North America lagged slightly behind the rest of the world, with mobile accounting for only 57.6% of video starts. However, mobile video starts still increased by 11% year-over-year in North America, according to the report.

“The primary screen is definitely shifting. All devices are not equal for video viewing,” said Jim O’Neill, Ooyala principal analyst, in a statement about the report.  “Consumers are as comfortable watching a sporting event, TV show or movie on a smartphone as they are on a connected TV, but not on their PC or tablet.”

When it comes to video advertising, viewership trends were consistent, with 55% of pre-roll ad impressions on broadcaster platforms viewed through mobile devices, compared to 36% on PCs.